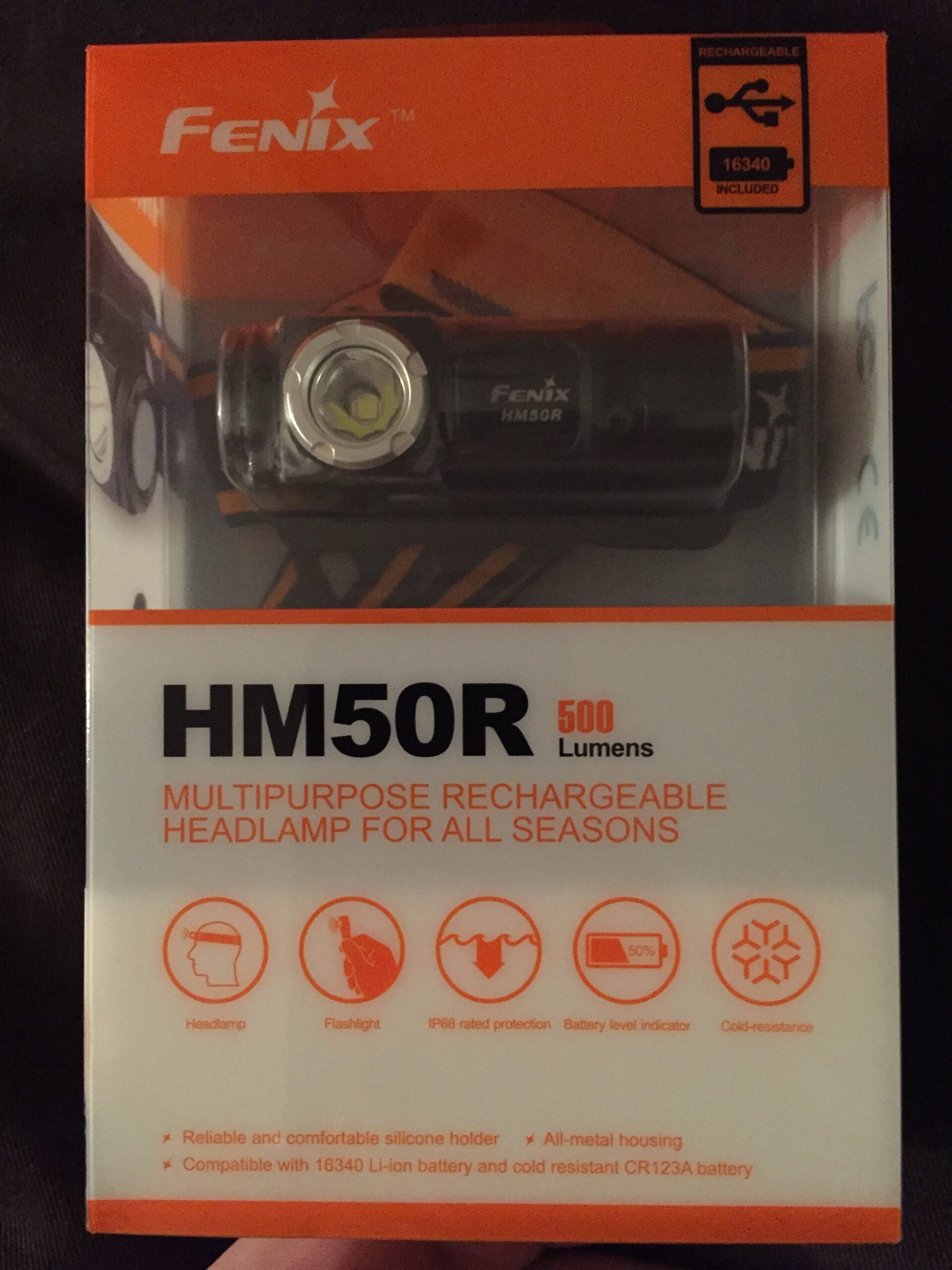 Earlier this year I received a sample of my first Fenix brand product.  I had seen the name on the market prominently displayed across multiple styles of lighting.  In this case, the product I received was a small rechargeable headlamp; model HM50R including the 16340 rechargeable battery (it should be noted the light is also capable of using CR123A batteries).

My first thought was the HM50R was too small to be to be an effective lasting.  I thought it unlikely to impress me.  But given some of my more recent experience with small handheld flashlights from other brands I remained open minded.  As it happens, Fenix proved me wrong and proved just as impressive as the company claimed.  I have several headlamps that I have bought over the years, I eventually abandoned all but one that I had done a previous review on.  So how do I know the Fenix HM50R is that good?  Because even that previously loved headlamp mentioned above now collects dust.  The HM50R is my go-to headlamp, period.

What makes this headlamp so good? Well, I will give you stats shortly, but in boils down to a size and weight.  You are getting so much light and so many options from something so small and easy to use.  We  are hardwired to take the path of least resistance and the simple fact is the Fenix HM50R has proved reliable, comfortable, lightweight and just … easy.  It has everything I need for most daily uses and nothing extra to weigh it down.

As for the stats:

The light itself is only 2 ¾ inches long with a battery cap on one end and a lighted switch button on the other end (next to the 90 degree angle led lens).

The light is held in a silicone sleeve that secures it to the 1 inch thick elastic adjustable band.  The adjustment is adequate for comfort even with my large head approaching a hat size of 8.  In fact, there is room for more adjustment even when wearing the light outside a hat.  That band stays nicely in place due to a centered rubberized section of the elastic that travels around the majority of the band.

Of course, the miniscule weight of 2.8 ounces helps in keeping the light right where you left it.  In truth, I have forgotten I was wearing it on more than one occasion.

There are four brightness settings changed at a tap of a button; 4 lumens, 30 lumens, 130 lumens and 500 lumens.  It’s a range of brightness is fantastic for anything you need.  The low lumen levels allow for mild lighting with extremely long battery times.  The mid level allows for most tasks normal tasks without blinding you with too much bounce back.  The full power gives you enough to see more that the immediate area, such as down the driveway.

As for battery life, those stats depend on the lumen setting being used.  There is a chart showing the times to be expected for each.  I didn’t test that timing in any objective way.  That said, I used this headlamp regularly and have charged it surprisingly few times.  When the light needs to be charged it switches to a lower power level rather than simply shutting off.  Whenever this occurred, I felt it was about time.  I never felt as though the battery time had failed to live up to its promise.

It’s listed as having a drop rating of 1 meter but given it’s use, I would think any fall hard enough to break the headlamp would leave you more concerned about your own head.

The waterproof rating is IP68 or 2 meters underwater.  I’ve used this headlamp looped outside my hat in several rainstorms with no worry of failure.

In the end, I can certainly recommend the HM50R as an excellent purchase.  Really though, I feel the  proof of the value of the Fenix HM50R is in the fact that I use it exclusively.  My own return to it instead of other headlamps says all we need to know.

Pick up yours at Fenix-store.com