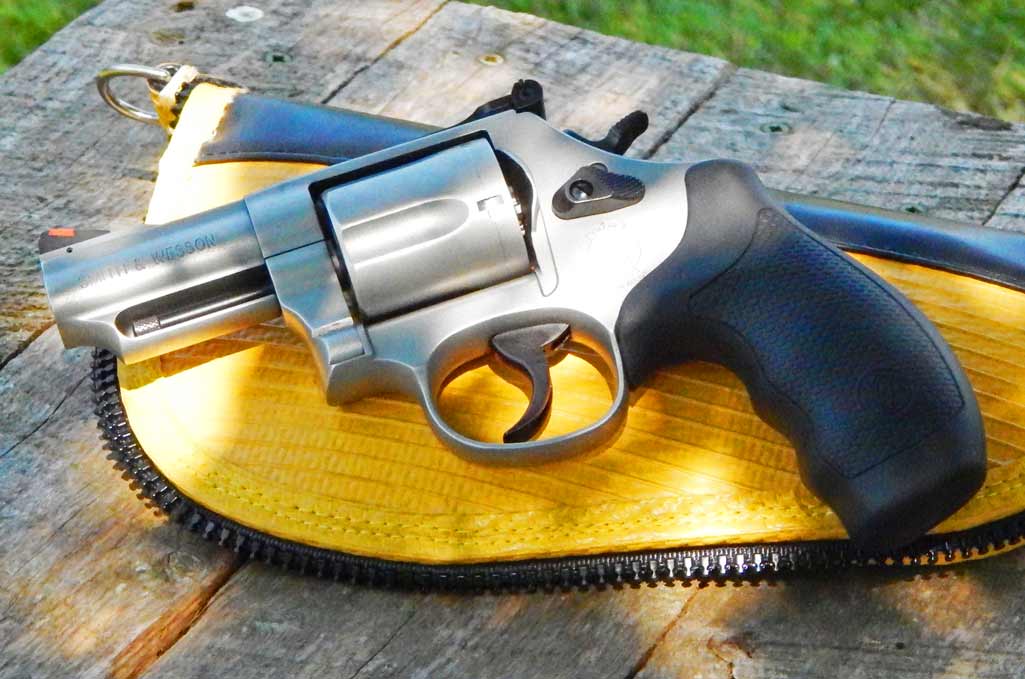 As a person with smaller hands/shorter fingers I have always had issues with the monster caliber handguns. While some may have a bit of a stretch for the trigger most of the big caliber revolvers simply look and feel like a flare gun in my hands. This has been an issue for me for the over 20 years I’ve wanted a 44 magnum revolver. In my teen years my father bought me a Marlin lever action 44 rifle for hunting. Ever since, I wanted a revolver tho match the ammo between my rifle and sidearm.

Unfortunately, there just wasn’t a viable solution for me. As it stood the only choices were a single action western style revolver or potentially a 5 shot Taurus Tracker in .44 mag. Neither really worked for me. In general the western style guns in that caliber came with a longer barrel. I was looking for something more compact. As for the Taurus, I’ve seen stories for years that discussed cracked frames in this model; not an option.

Then in 2015, Smith&Wesson brought the Model 69 Combat Magnum to market. I was elated. The new revolver was built on an L frame. The gun was smaller in stature with a 5 shot cylinder to compensate for the pressures produced by the 44 magnum. I was so happy, until I picked one up and realized the 4″ barrel meant the gun still felt too big to fit the role I wanted it to fill. I went home that evening and photoshopped this image for social media, begging S&W for a shorter version.

Then at Shotshow 2017 I walked into the S&W booth and saw my version of the Model 69 hanging on the wall new for this year. I couldn’t believe my eyes. In looking the gun over, the grip was still a bit bulky but overall the sizing was so much better in my eyes. (The grip needs to have some meat for the sake of control.) It was my opinion that this was the size with which S&W should have started. If someone wanted a large sized revolver they had plenty of options. If your choice was the more compact 5 shot, wouldn’t it stand to reason you’d prefer a gun that is more all around compact?

A couple months ago, I got the chance to get a T&E sample of this weapon. I jumped at the chance. It arrived with little fanfare but great excitement on my part.

The short barrel version of the Model 69 Combat Magnum has a 2 3/4″ barrel length vs the previous 4″ barrel. The weight is significantly reduced at 34.4 oz. So my first question was about recoil. Would the short barrel and lighter weight make the Model 69 to snappy or painful to be effective? The first trigger pull did come with a little trepidation. In reality, the recoil is certainly significant. While a competent shooter should be able to effectively handle the gun, follow up shots will take some practice with this gun. This one kicks about as hard as any handgun I’ve shot. It’s necessary to use a two handed hold and to have shooting experience for this weapon. Do not underestimate the power of a 44 magnum. That being said, in later sessions I found I was getting used to the recoil and felt it less intense.

My gun came to me as a T&E gun which means I have no idea if someone had the weapon before I got it. I think maybe someone did, because the sights were a bit of a challenge. The front sight is a classic tall ramp with red insert. The rear has an old school S&W adjustable lollipop sight blade. Maybe I was anticipating recoil or a bit intimidated in my first session but I could hit anything. I popped a bore laser in and adjusted the rear sight for 15 yards and after a very quick test fire took the Model 69 with me to my Panthera trip where folks took turns trying out shooting at a 200 yard target. I warned everyone the gun was only moderately sighted in and there was little to no chance of hitting anything at that distance. That didn’t stop us from trying. The reaction the the revolver was almost universal. Nearly everyone that fired it giggled with excitement and had an astonished envy for the weapon. Only one local deputy stated “that’s too much gun for me”.

I think the general consensus was the Model 69 is much more fun to shoot than you may expect. S&W did a good job with the overmolded rubber grip. Ideally, I would like the look of a VZ G10 grip but I doubt the shock absorption would be comparable. It’s fair to say the cartridge is adequately tamed by the Model 69.

So back to the sights. After the quick and dirty sight in job I mentioned above, I decided to refine the job. After some adjustment I was pretty happy with accuracy. At 25 yards I was able to put shots within about 1 inch of the bullseye

and with a little patience and multiple shots I hit the 8″ gong at 75 yards.

Bullet drop was not a factor at that distance as my shot hit the right side of the gong at near center elevation. The more difficult situation for me was a combination of light, sight coloring and possibly some trigger weight.

In my case, the old school front sight ramp with red insert isn’t my favorite. I feel like it messes with my sight picture a little. When shooting EZ2C targets I am putting a partly red front sight over a red/orange target area. It’s not the most clear sight picture when you focus on the front sight. When I was aiming at the gong at 75 yards I was in a more lit area aiming at a very small target in a deeply shaded area and again the target was partly red. In both situations the sight picture was less than ideal. Were targets and lighting different the results would have been better. I do believe I will swap the front sight for a fiber optic if the weapon stays with me.

So the next thing I wanted to examine was power. Sure, the recoil was significant in this short barrel option but does that mean I lost too much power to make the gun a viable option. To test this out I decided to set up 3 cider blocks and shoot each with different calibers. In the photos and videos you will see the .38 special chips away at the block’s edge, the .357 magnum in it’s first shot hits dead center and stops in the surface of the block (you can actually see the bullet in the front of the block), lastly the 44 mag from the Model 69. The 44 blasts right through the front and takes a sizable chunk out the back side of the block. With a second shot placed dead center the block gives more resistance due to the solid center portion. The result, exploding block. There is simply no comparison between these rounds (even with the shorter barrel).

As with most new firearms finding a holster is always an issue. With the use of the L-frame and the short barrel finding a holster for the Model 69 was a challenge. I was able to find a good fit with Aker Leather “133 White Lightning” holster. It’s a OWB leather thumb break holster that allows the barrel to pass through allowing it to be used for either length barrel. It’s a good option if you’re looking.

The other accessory you may notice is the pistol bag pictured with the Model 69. The brand is Badass Bags. They make gear bags from retired firehose and tractor inner tubes. The result is a ‘soft sided’ gun bag that’s tough as hell. The material is so tough, I told the owner he should attempt to get it rated for air travel. You can’t break into the bag without tools any more than you could a hard box. Its hardcore protection for a hardcore handgun.

In the end, will the Model 69 be your new CCW EDC? I doubt it. But there was a niche that the Model 69 fills really well. When looking for a pack gun or a trail gun that can actually keep you safe without taking up a lot of room the 69 is a great choice, especially in bear country. If I am hunting, believe me it will be a sidearm of choice. I don’t plan to take an animal with it but it shares ammo with my rifle and if I suddenly need to go to my backup I have the power to stop almost anything in it’s tracks.