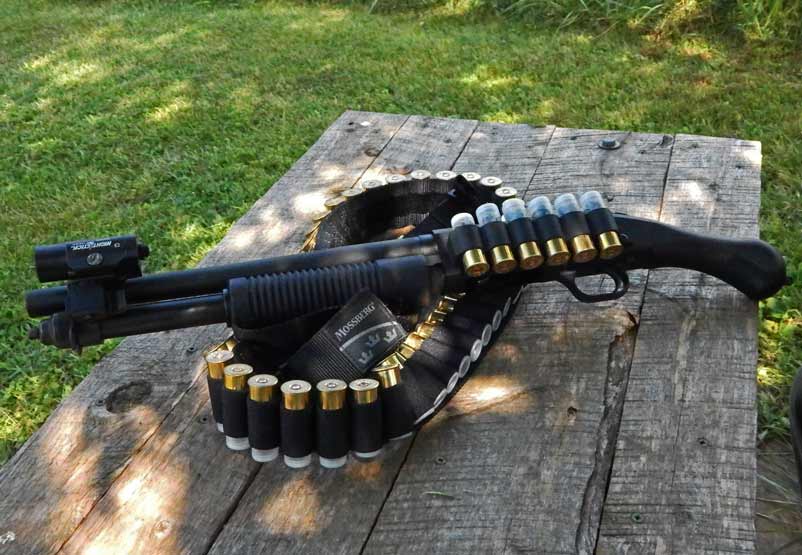 In mid 2015 Black Aces Tactical released a ‘firearm’. That gun was an awesome construct made to fly in the face of the ATF. The set out to manufacture a gun that could not be classified and as such would not be limited by the normal definitions. So there was no worry of short barrel paperwork or AOW tax stamps, etc. Everyone waited to see what the federal response would be; the firearm classification stood.

Fast forward to Shotshow 2017 and we find that Mossberg has entered the new ‘firearm’ market with the “Shockwave”. The Shockwave is based on the successful 590 platform. With a Raptor Shockwave grip, 14 inch smooth bore open barrel in 12 gauge. Most would think this is a short barreled shotgun, but as it was manufactured in this configuration the classification is ‘firearm’. A shotgun would be manufactured with a stock which the shockwave was not. It’s not a pistol, because a forward grip is required to operate the weapon. Because it doesn’t fit either class it falls under ‘firearm’. (Do not add an aftermarket stock as it will chance the classification and require a tax stamp.)

After receiving a Shockwave for T&E my first impressions were fun and classic. The design just seems like something you would have made in your garage before the laws prevented such things. It just seems right and in a way that makes it feel like we’ve gained a little freedom back in a time of oppressively stupid firearm laws.

As for fun; boy is the 590 Shockwave a riot! The design isn’t exactly conducive to using the sights and aiming down the barrel. Instead, the Shockwave naturally finds itself being shot from the hip. To be honest, don’t we all really want to shoot something from the hip? In doing so, you discover the magic of that Raptor Shockwave grip. The grip positions the hand in a way that allows recoil to float straight back instead of breaking upwards. The result is a little sway if the body and bump of the grip into your midsection. It’s surprisingly pleasant to shoot.

The next thing you discover is you have no concept of where you are aiming the barrel when shooting from the hip. Nearly everyone that’s tried the gun has shot over the target. When shooting something like this from the hip we have a tendency to hold the barrel at an elevated position. I find if you think you’re aiming too low you’re probably on target. It will take a little practice but once you have the feel for it, hits keep getting easier.

Next, you’ll want to add on a few extras. My first stop was AdaptiveTactical.com where I picked up a 6 shell receiver mounted shell carrier and a MossbergGear.com 12 gauge bandolier that holds 45 shells and adjusts up to 58 inches. That means if you are a big fella and want a shotgun belt you’re covered.

My next extra item was a new Go Gauge Tactical follower. This replacement follower has red LEDs inside that are recoil activated. So once the mag tube runs dry I get a blinking red light to guide my reload. Recoil activated means the follower is lighting up in the tube where it’s not visible but don’t worry about that the expected life is of the module is 200,000 activations. I don’t expect most of us will put 200,000 rounds through the pump gun.

Lastly, I need visibility, that means a weapon light. This particular challenge was the most difficult. A weapon light means I needed a mount. The minor changes made to the 590 platform for the Shockwave negated the use of nearly every mount on the market. There simply isn’t enough room anywhere. The only option that was viable was the GG&G 1655 or 1655R. These mounts are made for the standard Mossberg 590 and GG&G warned that the mount wouldn’t fit and that it may be necessary to place it in a position that would be considered backwards. In mounting the 1655 I found it seemed to pass (narrowly) by the forend of the Shockwave.

It may have been ever so slightly moved but I couldn’t tell by looking. So I thought the mount would work for me. However, while firing the recoil coupled with the pump action caused the back of the light to jam into my thumb in a painful way. For comfort I ended up turning the mount around anyway. Now GG&G has released a model 2007 which is designed specifically for the Shockwave. Perhaps, I will revisit this article if I purchase the 2007.

As for the light itself, I mounted the Nightstick TWM-850XL with a swapped out pressure switch that would be more appropriate for the application.

This Nightstick provides a whopping 850 lumens and most importantly durability. Face it, the recoil of a 12 gauge is substantial and this particular 12 gauge has reduced the mass that would normally calm that recoil. As seen in the cinderblock video, the Nightstick takes that recoil without an issue.

The best part about the 850XL for me is the beam. If I have to use the Shockwave in a defensive role, it’s likely to be at night, in the dark. Not only does the 850XL light up the area but the bright central beam acts like an aiming beacon. If I am loaded up with 00 buck I can expect anything in that central beam to be destroyed. With distance that beam will widen but so will my shot pattern. Given the choice between a light and a laser I will choose the light every time and in this application the Nightstick 850XL almost functions as both for me.

As time passes, I keep appreciating the Shockwave more and more. It really has become a fast favorite.