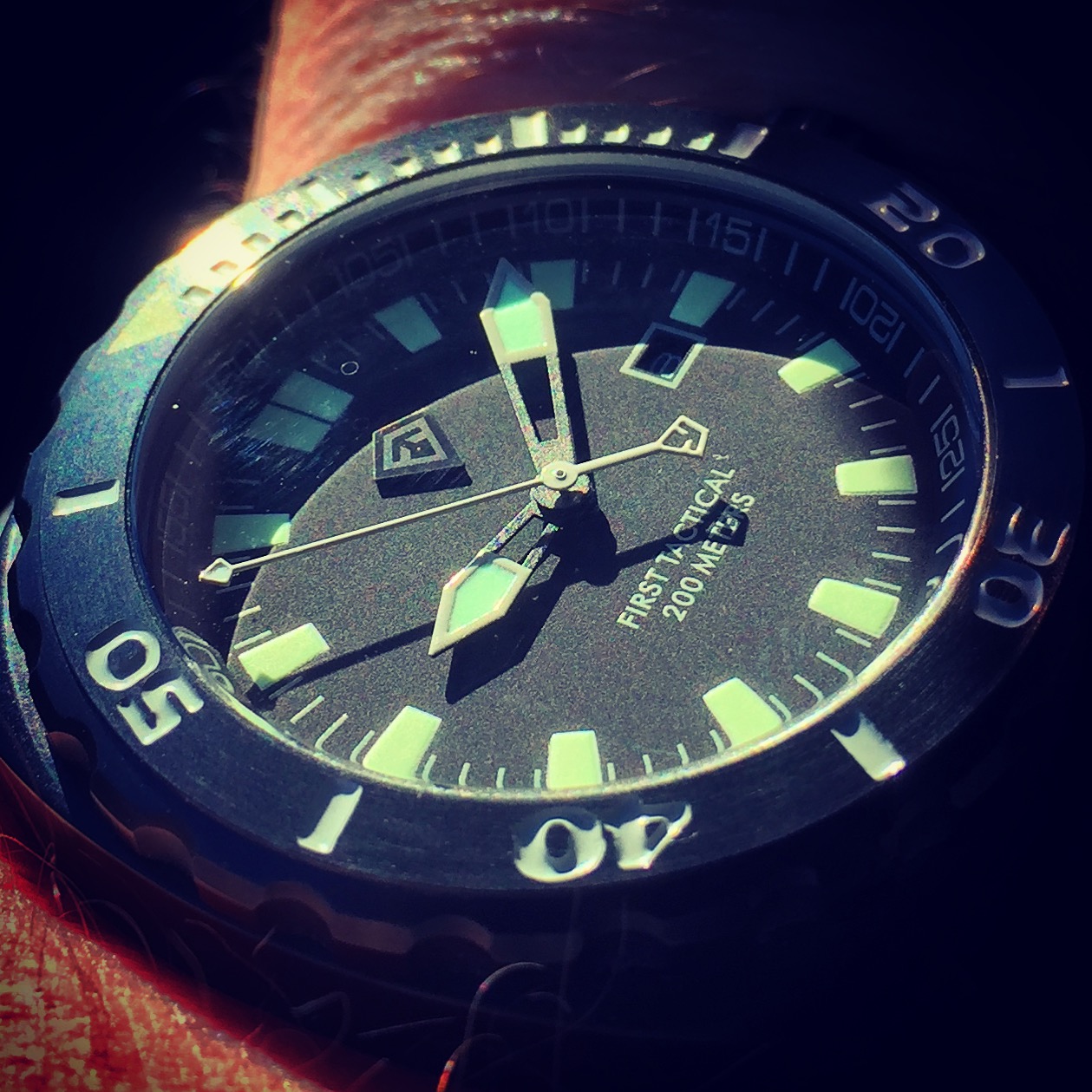 As I mentioned earlier, a watch was part of the reason we spoke with First Tactical in the first place. Then First Tactical sent along the Fathom. It’s the nicest watch in their line and I like watches. I have about a dozen that I rotate in and out of wear. Most of my watches are for looks and I tend to protect them from hard labor, not so with the Fathom. Instead, each time I had work to do whether it was landscaping, carpentry or gunsmithing the Fathom was there for the ride. All those jobs that would potentially scratch or crack something saw the Fathom on my wrist. To this date, the Fathom remains unscathed.

So lets talk basic function. First and most importantly, it keeps good accurate time. Regardless of what else we can or want to do with a watch, it is useless if it doesn’t keep time. The Fathom is a Japanese quartz movement.

The origin of the movement wasn’t listed on the website which seems like an oversight because a good movement makes a sale in the watch world.
The next big point for me is readability. The watch is easily read in normal conditions but this is listed as a dive watch. So what about poor conditions? I can tell you, the photoluminescence of the face glows better than any watch I’ve seen. The glow makes the watch completely readable in the dark based only on collecting ambient light in the office.

I was very surprised that I never needed to charge it with a light of any kind and the glow would last long into the night. I can’t think of a single time where I looked at my watch and couldn’t read it in the dark. As for visibility underwater, I would imagine a quick charge with a flashlight would make it plenty bright.
As for it being a dive watch, it is rated for depths of 200 meters. I am not going diving to those depths any time in the foreseeable future. So I wanted to put the watch under some pressure and see if it had any problems. I decided to freeze it in a block of ice.

The watch worked fine and the folks at First Tactical were happy to know the low temperatures weren’t an issue for the Fathom. But I just didn’t feel like was under enough pressure because the edges of the watch case were still exposed after freezing. I decided to freeze it again. This time I submerged it more completely and was sure that it was suspended to fully encase it in an expanding block of ice. Again the Fathom came through it with no issue.