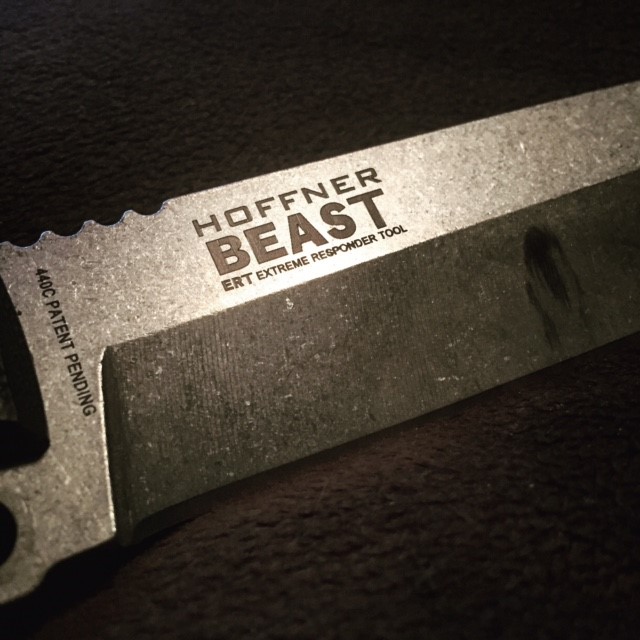 While at Shotshow 2016 I was visiting with one of the owners of Frog Lube, discussing the performance of the product when I met another visitor; Brian Hoffner. As it happens, Mr Hoffner was there as a long time friend of the Frog Lube family and was promoting an upcoming cross over event of sorts. He was showing off the Frog Lube branded version of his fixed blade “Beast”. The man was high energy and it was infectious. But as big as his presence was, his knife quickly made a bigger impression. Hoffner was standing there demonstrating thrusts and pivots in an expert manner with the thickest blade I’ve ever seen. The Beast in his hand was the “Frog Lube” version and he was making it sing through the air and pivot to a reversal in a way that seemed crazy for something so substantial. I told him it was one of the most monstrous knives I’ve seen and certainly unique. He told me “pry on anything, you can pull on it while your friend pushes and you’ll never hurt it.”

I was impressed with what I could see and wanted to get some time with that knife. It didn’t take long to arrange a sample for T&E. I didn’t specify what should be sent just a version of the “Beast” (it comes in a variety of choices such as blade color, grip color, texture, etc.). When the Beast arrived I was excited to see what was sent. I opened the Hoffner box labeled “Extreme Responder Tool”; I saw a highly textured set of grip scales in black G10 with “index divots”, kydex sheath and highly adjustable locking belt clasp. I drew the knife from the sheath and spotted something that immediately worried me, etched near the scales “440c”.

The question I never asked at Shotshow was “what’s it made out of”. There’s nothing wrong with 440c stainless steel. It’s a good blade steel that won’t rust, holds an edge well and is easy to sharpen. My worry is the use of 440c in a 7 inch blade. I had suspected 5160 or a tool steel for this application. 440c is fine for a folder or smaller fixed blade but I worry about the use of stainless steel that is potentially brittle in a workhorse blade like the Beast could lead to chipping or a possible fracture under stress. Luckily, Hoffner’s decision was a good one and my time with the Beast proved it. I set out to test this knife in ways that would stress the blade I had never tried with any other knife.   My conclusion was the combination of blade geometry and 5/16 inch thickness made the hardness a nonissue. In fact, it makes the choice of stainless a good one, especially a high carbon alloy steel such as 440c. Now it’s a workhorse that’s just about impervious to the elements.

In my testing, of course, I chopped with the Beast as usual. There were certainly no problems with the task as the Beast is more than capable of handling any wood in it’s way. The thickness of the blade does slow the Beast’s progress in this task as it has angles more akin to a hatchet than a knife. While chopping wood may not be as fast as with other blades, splitting wood by batonning is a breeze. That same thickness that slows chopping pops the wood apart quicker than anything other than a wedge made for the job. Also, because the profile of the blade is rather narrow, it won’t get bound up and stuck uselessly in a too thick log.

The next step I took was a literal one. I wanted to see if I could put maximum stress on the side of the blade to mimic a worst case prying scenario. So I set the Beast between the slats of a pallet and stood on the flat of the blade. I would never attempt this with any other knife I’ve seen. To drive the blade into wood and stand on the spine would be feasible with a relatively thick blade, but I would never put that pressure on the flat of the blade. This time I did. I knew a carbon steel blade would likely bend if overstressed but stainless would probably snap if anything went wrong. So I won’t deny I was a little nervous about putting 300 lbs plus gear (2 pistols, 50 rounds, 2 knives, tac light and other EDC, it adds up) on the side of the blade and just standing there like it was a step ladder. Again the Beast proved the stronger. It held me rock steady. Yes, there’s a video of this, yes there’s a still as well. They were taken at different times and there were more that weren’t used. In other words, the fact it held wasn’t a fluke because it did the job several times.

The part of my quest to destroy this knife took me to the range. I decided to test the edge. The 440c would be at it’s thinnest along the edge, as such it was the most likely place to create a chip or failure of some sort. I thought shooting that edge and splitting a bullet may be the way to create that failure by delivering high velocity impacts to a concentrated area. This was further intensified by the point blank range of approximately 15 feet at which I was shooting to achieve the accuracy needed for the test. I purposely shot the edge several times near the base of the blade, concentrating my firepower to a single area. I shot the blade multiple times to get three decent bullet splits on film. After all that the edge remained flawless. I picked a little lead off and was able to show there were no rough spots on the blade by slicing paper along the area I shot. I was truly astounded.

After all I had done to the blade of the Beast I was taking a few photos of the flat with the lead marks from the bullet split to show it was still untouched. (There wasn’t even a need to touch up the finish of the blade.)

It was at this point I thought about the actual sharpness of the blade. Due to the thickness, the blade can only ever be made so sharp. The geometry will allow for something that is plenty dangerous as a weapon, an capable of piercing steel, opening a car door like a can opener, but you won’t ever shave with it. Or so I thought. I hit me that I had never even attempt to shave with it. I had abused the crap out of the Beast and never thought to test how sharp it was out of the box. So I ran the blade down my forearm the way I have done so many times before. I was shocked to see a bald patch and hair on the blade. I’m not sure what kind of magic Hoffner is using in the creation of the Beast but I say keep it up. They have managed to astonish me at every turn.

We all know, no one blade will ever be able to do every job perfectly, or even every job well, but Hoffner’s Beast does a damn fine job at everything I’ve tried so far. I’m thoroughly impressed with what Hoffner accomplished here.

The only thing I would say could be improved is safety. The Beast, as used by Brian Hoffner is fluid and spinning and amazing and perfectly safe using the right techniques. For instance the way the jimping is added to the pommel of the knife allows one to grip over the end with the thumb while holding the knife in a reverse grip. As Hoffner told me himself, doing so would allow a backward stab on an attacker that would take out a femur. However a novice attempting the same maneuver without that thumb giving leverage over the end of the grip would likely lose their hold on the knife and slice their own hand as badly as they hurt the attacker. Before I could voice any such concern, Hoffner shows up with an optional improvement to the Beast. The Beast can now be purchased with an optional 550 cord removable lanyard attached in a way that acts as a flexible D guard around the hand. This option increases the safety and retention of the Beast and looks great doing it. I love the new option. (If you want it, you will want to buy it with the lanyard because while you could make one you will need to correct sheath to allow for the forward shackle. So unless you have ‘mad skills’ with paracord and a heat gun you may want to leave the lanyard to the pros.)

Build your Beast your way at Hoffners.