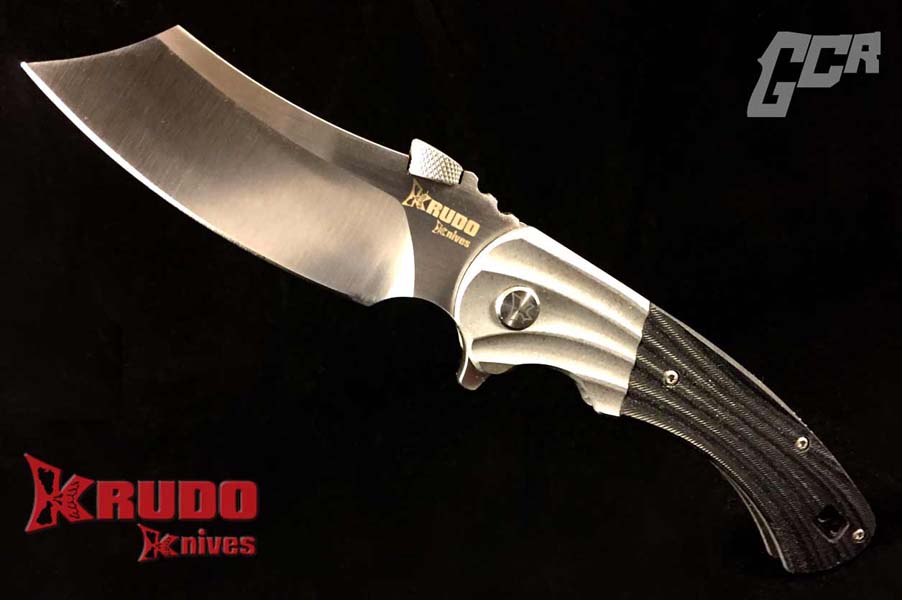 Over the years I’ve written about several types and brands of knives. When discussing folders, I’ve given a list of hard to find wants that aren’t often found together in a pocketknife. In January 2016, I met Louis Krudo at shotshow. He was showing off his prototype Dao folder and my list flew out the window. Yes, Krudo supplied a sizable blade. Yes, Krudo certainly had the innovation covered. But nothing mattered more to me at that moment than the Krudo aesthetic seen in the Dao folder. From the first moment I was hooked by the shear attitude of this knife.

The look of the Dao folder is certainly unique. While the design is very forward, it conjures images of back alley straight razors. It’s an intimidating look to say the least. It throws out the usual folder ideas and shows us that more inspired designs can be just as functional.

Starting with the blade shape. The Dao shape is not one that you would think of as a piercing tool. However, after a little time with the Dao you come to realize the point is more accurately described as well supported. The point is far from blunt and has so much steel nearby in the spine, it seems indestructible. While the wedge of steel leading to that thick spine may slow a straightforward stab, an upturning motion would use the curve of the blade to your advantage allowing the curve of the tip to slice its way in. And by the way, slice it can, out the box the Dao was incredibly sharp especially for a blade so beefy.

That blade curvature simply wants to slice. It’s razor sharp and heavy. The Dao is capable of doing serious damage. While the cutting edge is around 3.25 inches the generous choil recess gives the reach of a 4 inch blade. At the same time the choil provides excellent grip for more precision cutting needs. The jimping on the spine of the blade couples perfectly with the choil giving near perfect traction.

As for the handle, the Dao is a framelock design with G10 scales over acid washed stainless steel. There is a reversible pocket clip for deep pocket carry. The pocket clip is tight and keeps this over 9 oz folder in place.

This brings us to the best of the technical features. The Dao uses ball bearing washers for a very low friction action. As mentioned the Dao has a heavy blade, too heavy for an effective spring assist. The Dao has a nice balance and opens quickly with a flick of a finger (even without wrist action). I say the flick of a finger referring to the primary flipper tab, but in actuality there are multiple ways to open the knife.

Krudo employs a primary flipper, a secondary flipper on the back edge of the blade (which allows for the extended jimping on the spine), and a thumb ramp that is genius. The Thumb ramp is knurled for use as thumb disc (which I find easier to use than thumb holes or studs). The change that Krudo made to the traditional thumb disc was to thicken and angle it, with this design it works similar to an Emerson wave. The knurled ramp catches the pocket on the draw to open the blade for you.

In this video Louis Krudo demonstrates the opening methods, while it’s a different model, the Dao functions in the same way.

In summary, the Dao is a sexy hunk of steel. It’s not dainty, or super concealable. If you are looking for a knife to carry in your suit pocket, this isn’t the blade for you. If you wear jeans and your looking for a blade that makes more of an impression than the 45 tucked in your waistband while you throw a leg over your Harley, you may want to look into the Krudo Dao.