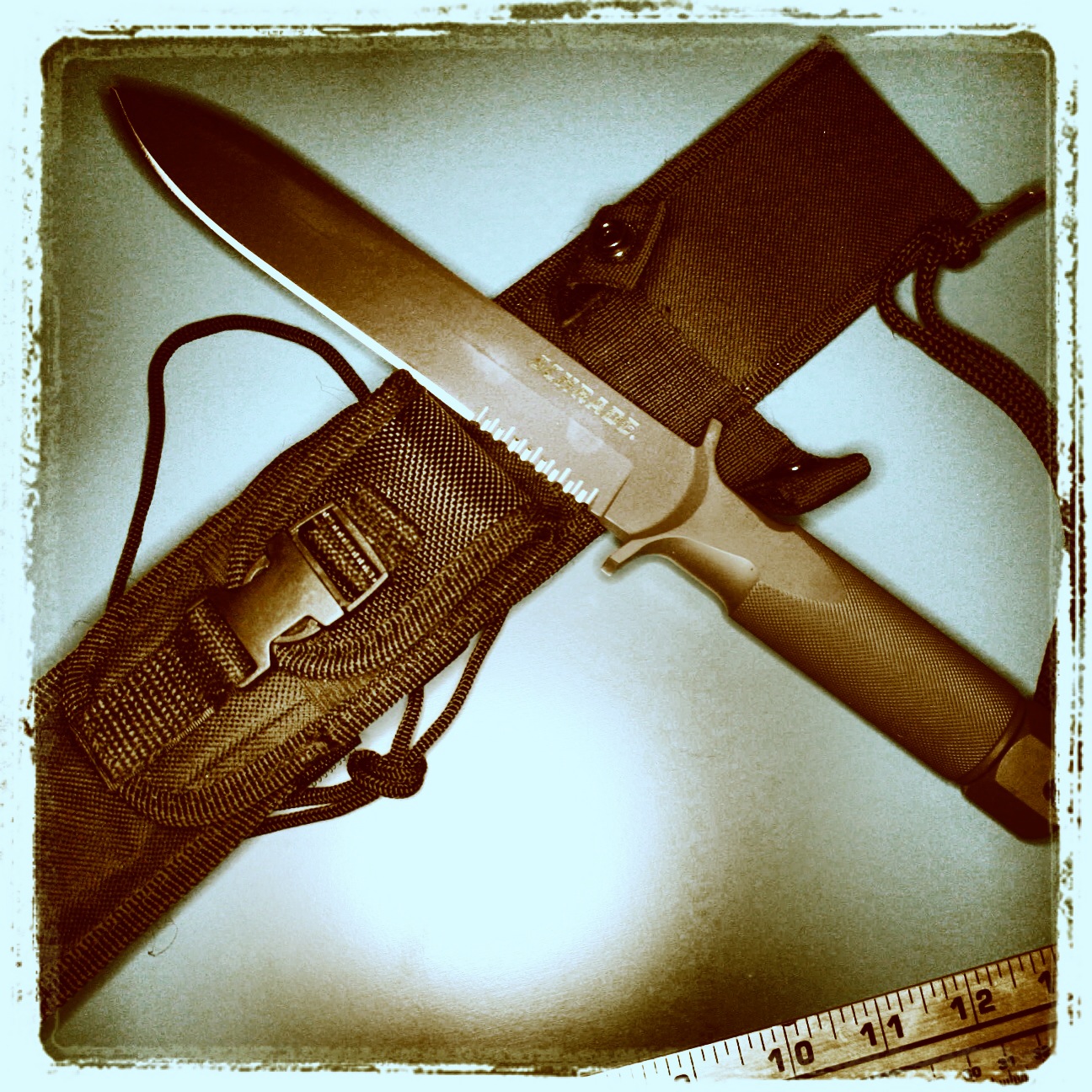 My first thoughts when I opened the box from Schrade was the SCHF1 was not the style one looks for in a modern survival knife. I wondered about the strength of the hollow handle and one piece drop forged construction. Upon, drawing the blade I was surprised by the weight and thickness of the blade and the surprises began to build from there. It quickly became obvious that Schrade had made a serious blade.
First let’s discuss the negatives (and it should be made clear I am being picky to find them). This product is made overseas. I asked if Schrade makes anything in the US at this time; the answer is yes there is a high end line still made domestically. Further, they are seeking ways of bringing more manufacturing home. Next, I noticed that the grinds are not completely symmetrical in some areas. I felt perhaps they could have taken one extra step in coating the bits inside the handle to prevent rust. Lastly, the o-ring seal on the butt cap should probably not be visible when the cap is in place as it is somewhat exposed to elements.
Now the meat of my findings. You get a 1070 SAE High Carbon Steel beast of a 7.5” blade that is right at ¼ thick. The handle is hollow and stores a 10 bit driver set and a t-bar handle. Out of the box it was sharp enough to shave, which is not always an easy task for a blade this thick. I thought the shape and weighting of this knife would subtract from its ability to chop well. I was wrong on that account. This thing chops like a machete and ate through a 3” hardwood like it was the Christmas ham. The next task was to baton a log. I went a little overboard with this attempt. I hammered this blade over an inch into a 2 year only chainsaw cut log about 4 ½” thick. This is not the usual fodder for a batoning knife. Normally, one would work with green wood of a smaller diameter. I gave up on this experiment when it became clear that my baton or myself would suffer a critical failure before this knife ever did. If there is anything about this blade that my not me ideal for this task it would be the blade grind near the tip, as it may be rough on the baton. After all this bushcraft, I confirmed the blade was still sharp enough to shave. Wow, that impressed me. Lastly, the shealth; it is fully adjustable with molle system and paracord tie down. When I say fully adjustable, I mean you can change the tightness of the snap closure, the size of the belt loop and the tightness of the pocket clasp. Also, as mentioned, it does have an external pocket for a sharpener or other small supplies. There is also a plastic lining to protect the sheath from the blade.
The quality provided in this blade is truly astounding for the price range. If I was to suggest any change I would replace the T-bar in the driver set with a 3/16” ferro rod and the lanyard with a woven paracord braid as I have done on my own sample. This blade will do any job you ask of a Ka-Bar at half the price. It’s available on Amazon for $51.50 currently and I feel it’s an absolute steal.