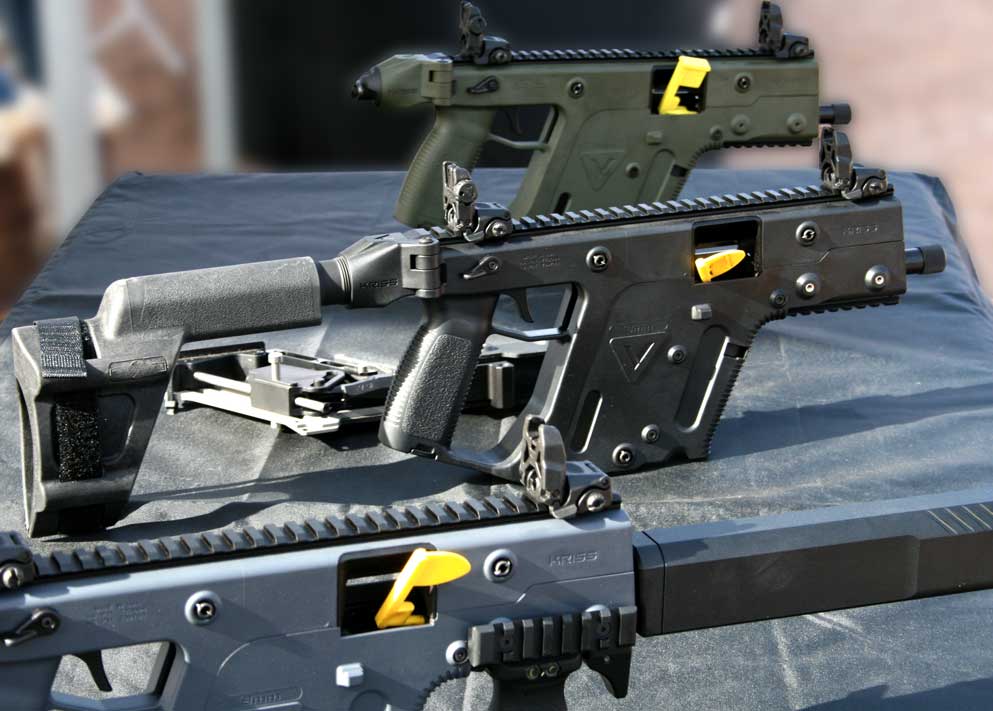 This year I decided to take advantage of industry day at the range and get hands on with a long time object of lust. The Kriss Arms Vector (in this case generation 2). For those that aren’t familiar, the Vector is a completely reimagined design of auto loading firearm. In traditional designs the gas operated bolt moves in a straight line to the rear of the weapon in order to eject the spent casing and load the next bullet. In the case of the Vector, that bolt pivots on a 45 degree angle and spends it’s kinetic energy on a downward trajectory.

Having given that brief explanation lets talk recoil. Felt recoil is a result of multiple forces. First, and most obvious, is the force of the escaping projectile and gases emerging from the barrel. The effect is like a jet engine pushing the barrel straight backward (equal and opposite reaction). On top of this the kinetic energy of the moving bolt creates more backward movement at that crucial moment. In a pistol, all this backward force pushes against your hand and the direction of least resistance is upward as your wrist becomes a pivot point of sorts. Further the plain of force is above the hand intensifying muzzle rise. In the case of traditional rifles, you will notice the butt stock generally slopes downward before making contact with the shoulder this aligns the eye with the plain of the barrel in order to facilitate aiming. In this case, the backward force is now on a higher plain than structure meant to stabilize it (the shoulder). Thus creating more of a muzzle rise with recoil. In the case of Eugene Stoner’s Armalite Rifle design (more commonly known as the AR platform) the sights were raised to facilitate aiming while keeping the direction of the force of recoil on the same plain as the shoulder. This design reduced muzzle rise, but did not eliminate it in totality.

This brings us to the brilliance of the Vector design. The redirection of the kinetic energy of the moving bolt creates a downward force to help mitigate the muzzle rise and felt recoil. In the case of the rifle version of Vector the stock and sight combination is much like the modern AR setup. The combination leads to a rifle that is an absolute joy to shoot in semi auto, burst or full auto. Any way you play, you can shoot more and longer with less of a fight to stay on target.

But there are other issues to consider with the Vector. Specifically, the size caused by the design of the internals. You can get the Vector as a pistol or rifle. In it’s normal configuration the barrel length is 5.5 inches. In a pistol configuration the gun is 16.75 inches long. That’s not exactly a concealed carry pistol. When you have a pistol that long, a 5.5 inch barrel seems a little short. As a rifle, with a 5.5 inch barrel one may begin to wonder about accuracy at longer range. By comparison, a government model 1911 pistol has a 5 inch barrel, how much accuracy can you achieve at what range? The advantage the Vector has in that department would be the extended sight picture. If you have 16 inches between your front and back sight you will achieve better results that a gun with 5 inches of sight picture. At range day, I was able to hit 8 inch steel plates at what I estimate to be 100 yards but I didn’t concentrate as much on accuracy as how controllable the gun was in auto fire modes.

Throwing out most of the technical talk. As a rifle, the Vector provides 45 caliber fire at a rate of 1300 rounds per minute or 9 mm fire at a rate of 1000 rounds per minute. If you pay for the tax stamp and invest in the select fire version you have an incredible amount of fun at your fingertips. The compact design (when compared to other select fire rifles) allows for a very nice close quarters platform. If you want to avoid a tax stamp you can get the pistol version in semi-auto with an arm brace and have the feel of a SBR without the headache.

My experience with the platform this year was stellar. I came away with a smile on my face and spring in my step. I will promise you I will take every chance I can to do it again.

My only want would be to spend more time with the Vector to see what can be done at longer range and how often and easy it would be to stay on target.