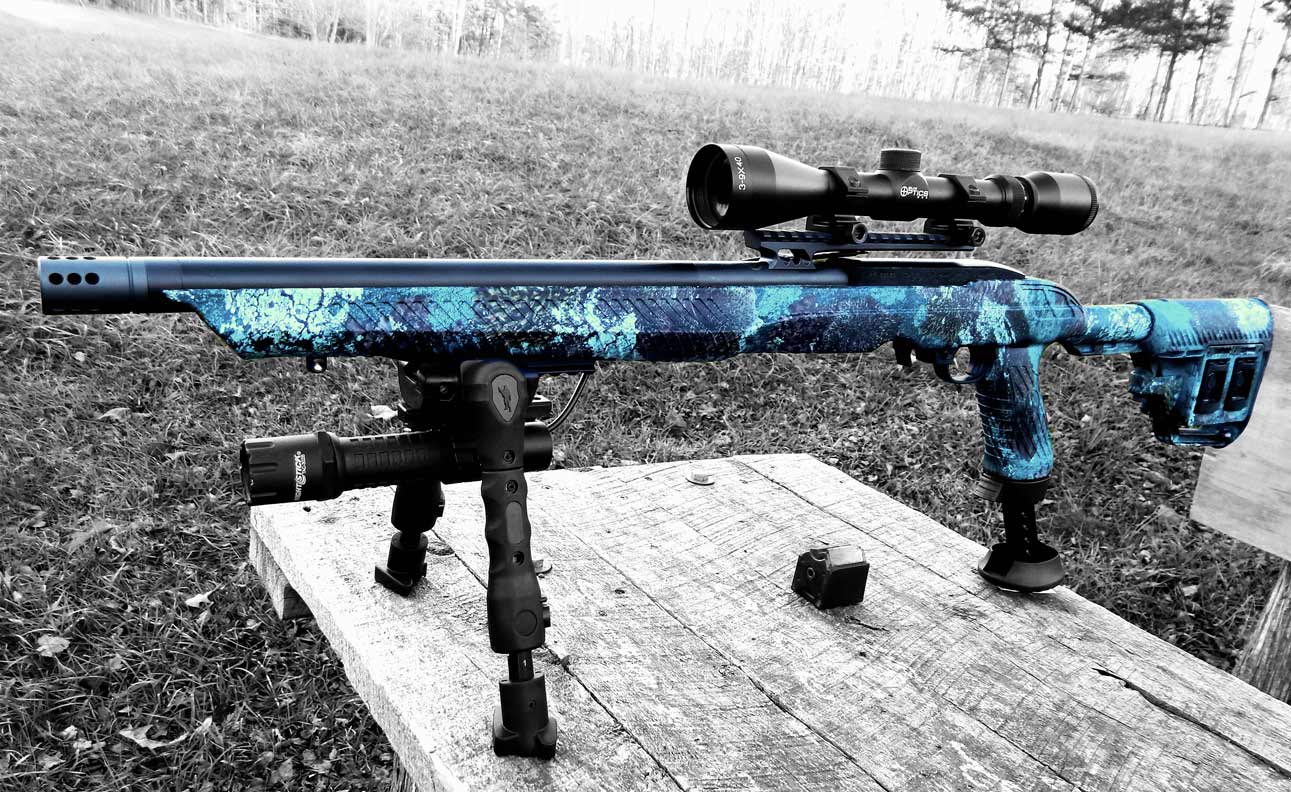 While attending last year’s ShotShow I came across a booth on the lower level with a very impressive array of weaponry. Adaptive Tactical had a display of some serious 12 gauge hardware with all sorts of stocks, fore-ends and both box and rotary magazines. The kind of power to make anyone nervous, should they be on the wrong end of any of those weapons. I turned the corner and saw a display of beautiful 10/22’s. They looked seriously custom but turned out to be upcoming modification kits. Immediately, I was drawn in. I thought “I have a plain-jane 10/22!” Then I thought “heck everyone has a 10/22!”  So it was time to talk with Adaptive Tactical about a sample.

As it turned out; the AdTac stock, TacTred monopod and TacHammer barrel were all still prototypes. It took a while to get the samples in because we wanted to be sure these samples were production models and would be the same items available for sale.

All the features that blew me away at ShotShow were included in the final products for 10/22, 10/22 breakdown and charger models.

In the case of the 10/22; the AdTac stock (manufactured by Tacstar) comes in black and a multitude of distinctive and exciting camouflage color schemes. The stock features an overall texture that provides a great grip while still managing to feel smooth. There is a pistol grip with M4 style 6 position adjustable stock. Inside the adjustable portion of the stock, storage has been added to house, not one but, two 10 round standard Ruger rotary magazines.

That housing is also reversible for maximum functionality whether you’re right or left handed. The forward portion of the stock features an insert that blends fully into the stock. With the removal of two screws the insert can be inverted to reveal a picatinny rail for a bipod or other accessory. Lastly, if you’re thinking this stock won’t fit your 10/22 because it’s made for a bull barrel; surprise, there’s a removable insert that allows the use of a standard or heavy barrel.

In addition to the standard AdTac stock, we also received a TacTred support. The bottom of the pistol grip simply pops off and the TacTred can be inserted and locked in with a single screw. The TacTred adds the ability to extend your grip and support the rear of the rifle for stable long distance shooting when combined with a bipod or other rest. The TacTred extends with a spring loaded push of a button with a multitude of locking height positions.  If you are lucky enough to have a rest at the correct height for one of those settings, you can set and fire away.  But if the settings of the bipod you are using and the TacTred don’t mesh on the intended target simply set the TacTred to the closest (shorter) setting and rest it on your off hand to tune the shot when needed.

The TacHammer barrel is a rigid core of P4140 Chromoly steel with heat and rust resistant coating surrounded by a cerakoted aluminum shell.  Thus providing a light weight rigid barrel with good heat management.  The TacHammer comes suppressor ready with a threaded compensator in place.

Per the Adaptive Tactical website the twist is 1/16 and measures in at 16.5 inches.  The length is just enough to clear the AdTac stock and makes for compact storage.

When I put it all together, wow, was I ever pleased.  The gun was everything I could want in a 10/22 and more. For this build, we also decided to add a SunOptics 3×9 22 scope, a CAA adjustable bipod and the new BX trigger system Ruger released last year for the 10/22 line.  It all came together very easily.

The answer; so simple it’s silly.  First remove the barrel band from the front of the stock. Then removed the single screw found on the bottom of the stock. Then you can simply lift your action and barrel out of the stock.  At this point if you are replacing the trigger you knock out 2 pins in the receiver and the trigger pulls out and you would simply reverse the process to add your new trigger.  Then the barrel can be removed by removing 2 screws with a hex driver found under the barrel in the front of the action and move the parts free of the slot in the underside of the barrel. Now the barrel simply slides out and you can add your new parts.  The only things you need to watch for; be sure your barrel is in straight and not a little to either side and be sure your cantilever optics rail is straight and tight.  It’s really that easy.

The outcome was a much nicer gun all around.  The gun is more accurate than before.  It’s more portable, has on board storage, a much improved trigger, optic and more stability with the CAA bipod and TacTred installed.

The SunOptics 3×9 we used was actually made for 22 caliber use.  It’s a nice option for good magnification, clarity and budget.

The CAA bipod we used was pure overkill for this rifle and is designed for combat use.  It has some really nice features, the bipod is adjustable with a spring loaded extension at the push of a button, the legs swing forward or backward allowing for more options on storage and with the wider mounted position of the legs the CAA bipod actually allows a secondary rail between the legs!  So, I didn’t have to lose my light when I used the rail for my bipod!

(A note on accuracy and my shooting.  You should know that I have a familial quake (I shake) and some days are good and some not so much.  So with precision shooting it can go either way with long range.  I did a lot of shooting with the 10/22 post makeover and with the few days we had of good weather none were really my good days.  Additionally we sighted the gun with and continued to shoot bulk ammo without cleaning the gun.  Even so, we saw increased accuracy and enjoyed this project immensely.  I am quite positive with better ammo, a day without a quake and a clean barrel we will find this gun to be an incredible tack driver.  I plan to update this post to prove it. So stay tuned.)