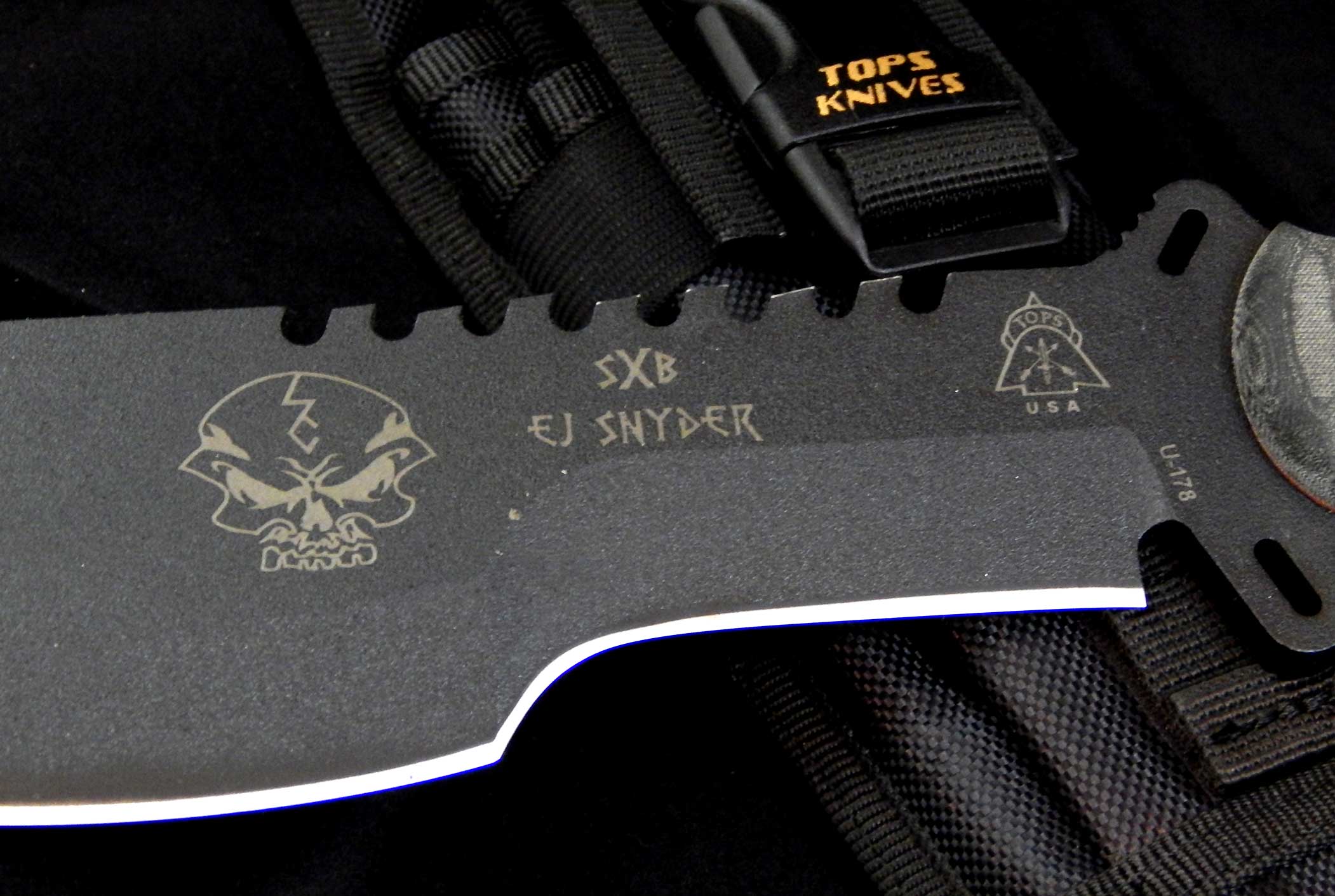 E.J. Snyder is a reality television star in my household.  In real life he is retired military with some serious survival chops and a bigger than life personality.  You may know him from no less than three adventures on Discovery Channel’s “Naked and Afraid” and if you do it’s safe to say we’ve all seen a bit too much of him.  Put some clothing on man!  E.J. joined up with TOPS Knives to produce a signature blade and with its arrival I can tell you I’ve learned more about E.J. Snyder.  In the 40 day extreme challenge on “Naked and Afraid” E.J. had the SXB with him for the trip.  At the same time I had the blade in hand.  This knife is huge and weighs in at over 2 lbs of carbon steel, micarta and nylon.  E.J. was wearing it around his neck and made it look like a normal sized blade.  The man is enormous.

So let’s talk about the knife. My first reaction was to be awestruck.  Truly, the blade just spoke to me.  I loved the way it felt, the way it looked and in fact was dreading doing any testing on the knife at all.  Why? Because I just didn’t want to mark it in any way.  It’s just that nice.  In fact I wrote to the marketing people at TOPS to tell them I think it’s their finest work.  All that from just seeing and holding it for the first time.

From stem to stern the knife is just about 16 inches overall with over 9 inches of blade.  It’s about 2 lbs of quarter inch thick 1095 high carbon steel with the TOPS “rocky mountain tread” micarta handle scales.  The sheath is nylon with a nice new addition of double straps, each of which has both Velcro and snap closure.  The blade features a unique shape that some have likened to the Tom Brown Tracker and a notching saw cut spine and a rock crusher or perhaps I should say skull crusher point to the pommel.

It also features a bit of protection in a jimped hand guard.

I would like to address those that say the knife is a revised Tom Brown Tracker.  First, if you want to rethink a blade design, starting with a tracker is a great place to begin.  But whether or not that blade was in mind when the SXB was designed, the finished product is superb and different.

The SXB handles very well.  In my chopping the added weight to tip really makes the blade sink in and do its job.  The beefy weight makes it ideal for chopping.  The knife handles most any heavy task you want to throw at it.  Batoning is quick work, thanks to the straight edge portion and the deep transition of the blade it can really easily be used as a draw knife.

Even finer tasks such as feather-sticking seemed to be a bit easier than with other knives thanks to the weight.   By the time I used the SXB to make feather sticks I was already quite tired and the added weight of this blade did the work for me.  In fact, the only place I found the weight to be a hindrance was striking a ferro rod.  I had heard the knife did not function well as a striker but I found it worked fine using the notching saw as my striking surface.

The trick was just finding the right position to hold the blade.

In all I would still say the SXB is some of the finest work produced by TOPS Knives to date and that is indeed a high bar.  The knife would be fantastic as a one option tool to get you through just about anything the outdoors or an enemy would throw at you.  It wouldn’t be the best tool at some single jobs but has a better chance at completing all jobs than anything I have seen.