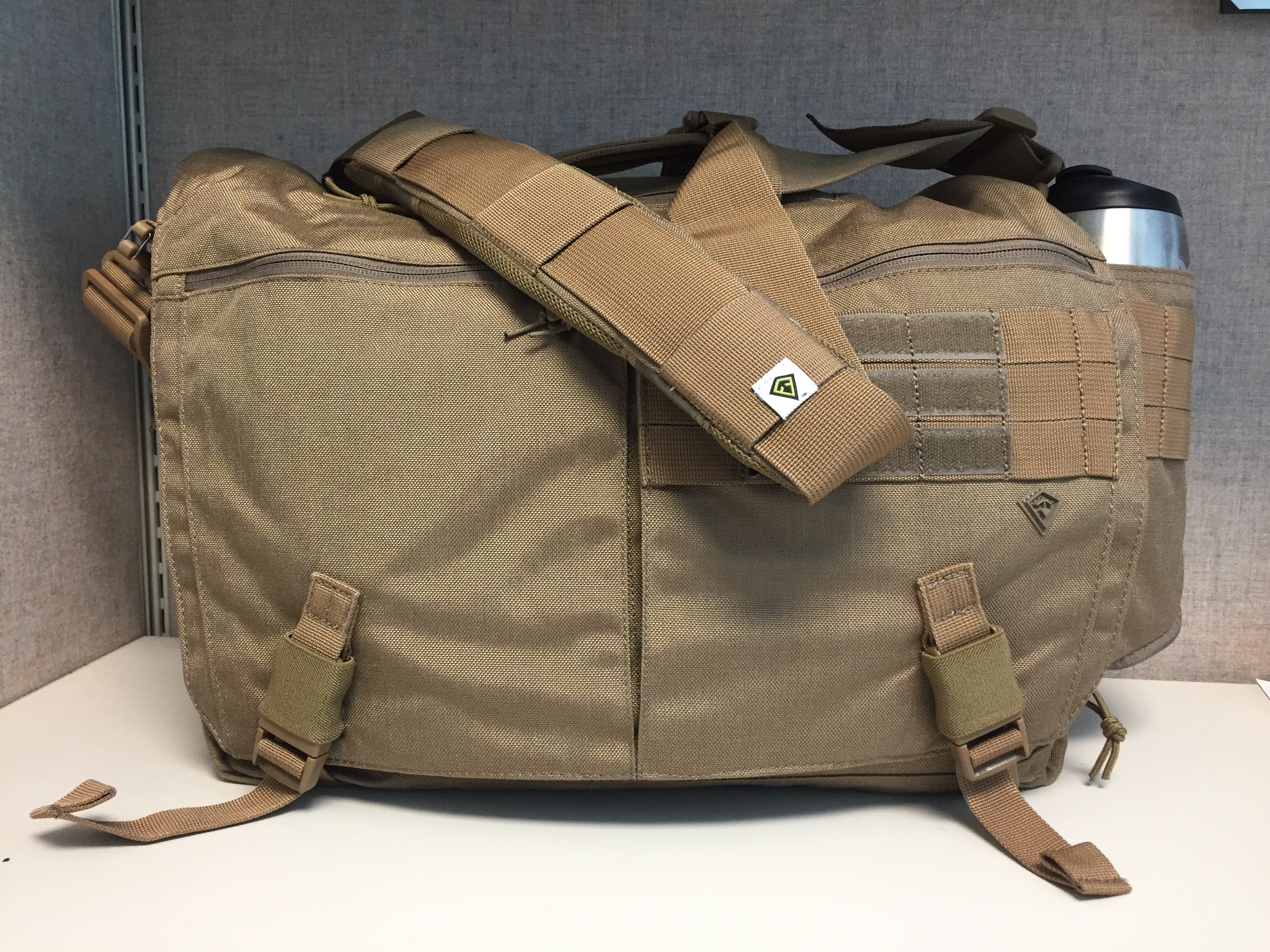 The Ascend Messenger Bag from First Tactical is the most well thought out bag I have ever seen. With approximately 27 pockets or partitions (1 hidden), 3 Velcro attachment areas and 4 MOLLE areas you can make it into whatever you may need.

The flexibility is astounding. It keeps my laptop and all its accessories, back up drive, meds, 1/2 gal of water, First Tactical Pack-it Jacket, documents, flashlight, knives, and so much more.

INCLUDING or maybe ESPECIALLY my coffee in one of the two zip open bottle holders.

The straps are removable and well padded with a rubberized underside for grip on your shoulder. The back of the bag has a luggage strap for travel. The buckles are covered with elastic material to protect them and keep them in place. The flap has Velcro closures with stow away covers that allow you to choose whether or not you want the flap to self secure.

When I say it is the most well thought out bag ever, I mean that. The hidden pocket isn’t just another zipper pocket in the back like most bags. That pocket exists but the hidden handgun pocket is closed by Velcro inside that pocket in such a way that it’s not even visible when closed as the edge is tucked under the overhanging zipper.

Speaking of zippers, many of the pocket zippers are dual sided so they can be opened from either side.
The laptop pocket is well padded. In fact, I accidentally tested that padding when my bag fell from a kitchen countertop with my laptop and a half gallon of water in a hydroflask growler inside. Yet here I sit, typing on that very laptop.
The versatility of the Ascend allows me to keep everything in it’s place from my EDC gear, to my computer and accessories, to my medical supplies all at once. The sizing even allowed me to comfortably fit a project AR-15 pistol with a 30 round magazine in place.

I then gained an entirely different perspective on this bag.
A pregnant friend saw my First Tactical Ascend Messenger Bag and had a great thought! “That would make a great diaper bag and carrying it won’t embarrass my husband.” Like I said it the best bag for ANYTHING. So, of course, I bought her one and added newborn supplies and gave her the greatest diaper bag ever.

Plus, she can still have a great bag for anything she needs after the need for a diaper bag has passed.

In summary, the Ascend Messenger Bag is simply tough, versatile and seriously smart. It’s the best EDC/Computer bag I have seen to date. I haven’t wished for a single feature, First Tactical thought of everything I wanted before I ever knew I wanted it.

One thought on “The Ascend Messenger Bag by First Tactical”