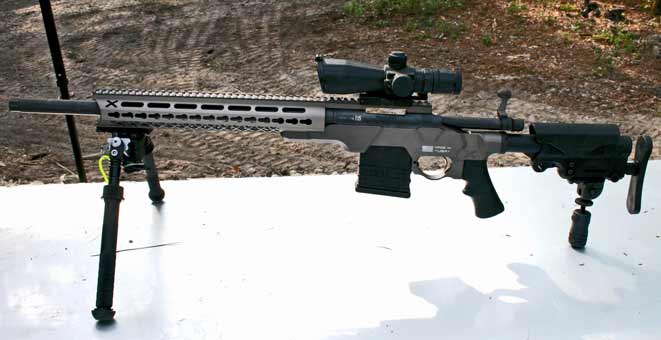 On Tuesday, July 26, 2016 we made our way back down to Guardian corporation’s Charles city Virginia location for a second annual media shoot hosted by American Built Arms Company. Last year we visited in order to test out the mod X rifle chassis system on the available 300 yard range. This year, it was all bigger and better. A B Arms was showing off generation three of their Mod X chassis system and Guardian Corp. had a 600 yard range waiting for us (do the math, that’s 1/3 of a mile). We knew the temperature would be soaring that day but how often do you get a chance to shoot at 600 yards and get instant feedback from a targeting system like the Oakwood control system? It’s a no-brainer.

A B Arms company

A B Arms is a small company based in Pennsylvania and the Mod x is their claim to fame. Simply put the model X is a chassis system that allows you to drop a Remington 700 (and clones) bolt action and barrel into a modular system that allows you much more freedom, adjustability and potential  accuracy while adding a detachable box magazine.

Now with the generation three the mod x has been seriously field tested and revamped based on the feedback. That feedback came from swat teams, sniper instructors and some other serious long-range shooters. The resulting changes are seen in the style and placement of grip, a more adjustable stock with cheek riser,

In our case we were shooting a Bergara action with Proof research barrel in the Mod X Gen 3. (The Begara is a lesser priced 700 clone.)

Wow, did it perform. I am not a long range shooter and have never taken a 600 yard shot before. I was able to shoot an eight inch group on a black silhouette with no marked point of aim. Further, the gun had far more adjustability than I actually used. Being one of the shortest shooters shortening the stock would have improved my eye relief on the scope but I left it as is for the convenience of other shooters. Nor did I adjust the height of the sniper stock rest. Instead I used my hand on top of a sandbag as my rear rest. Still I shot 1.4 MOA at 600 yards. That’s saying a lot for the equipment! If that’s not enough, others were calling and making shots like “this one between the eyes.”

That’s crazy accuracy in my mind. It’s not like we were measuring wind speed or entering bullet weights into a computer. If you want a fully adjustable long range option you need look no farther.

Very soon there will also be a recoil pad available for the urban sniper stock for those that want it. For myself I didn’t even notice the recoil of that 308. Too much fun to care.

More exciting news, the 6.5 Creedmoor will be coming about year end. Their aggressively pursuing other bolt-action manufacturers so that they can build their own tactical rifle.

Also on the horizon they have designed and manufactured a butt stock adapter for the Remington Model 7600 pump action rifle. It will also fit on the Remington 870 – 20 gauge shotgun, the Remington 7615 Pump Action LE Rifle and the Remington 7400 Semi-Auto Rifle to name a few. The adapter will include the adapter itself, the A*B Arms P*Grip, MilSpec buffer tube and Urban Sniper Stock™.

The full day’s fun required loads of ammunition. We were supplied by Gorilla Ammunition and I was impressed by their offerings. Of course good consistent ammunition is a must for long range accuracy. Gorilla proved its worth right away. Later though, we got to see the Silverback ammunition and it was extremely impressive. The Silverback loads are seriously damaging all copper beasts. The 300 Blackout version penetrated deeply into ballistics gelatin and peeled open to look like a palm tree.

The .45 ACP loads we fired all penetrated to about 9 inches, dumping all their energy on target in a flash. The reason why? Because these cavernous hollow points spread out with five sharp pedals measuring 1 3/8″ at the widest point. The best part was we fired a lot of them and the results were consistent. This is shaping up to be one hell of a defensive load.

Oakwood Controls provided the equipment we needed to have such instant feedback on all of those long range shots. Here you see my 6 inch 5 shot group at 300 yards on an unmarked black target.  I am happy  with that group any time I lack an actual aim point on the target.

One thought on “A B Arms second annual media day”