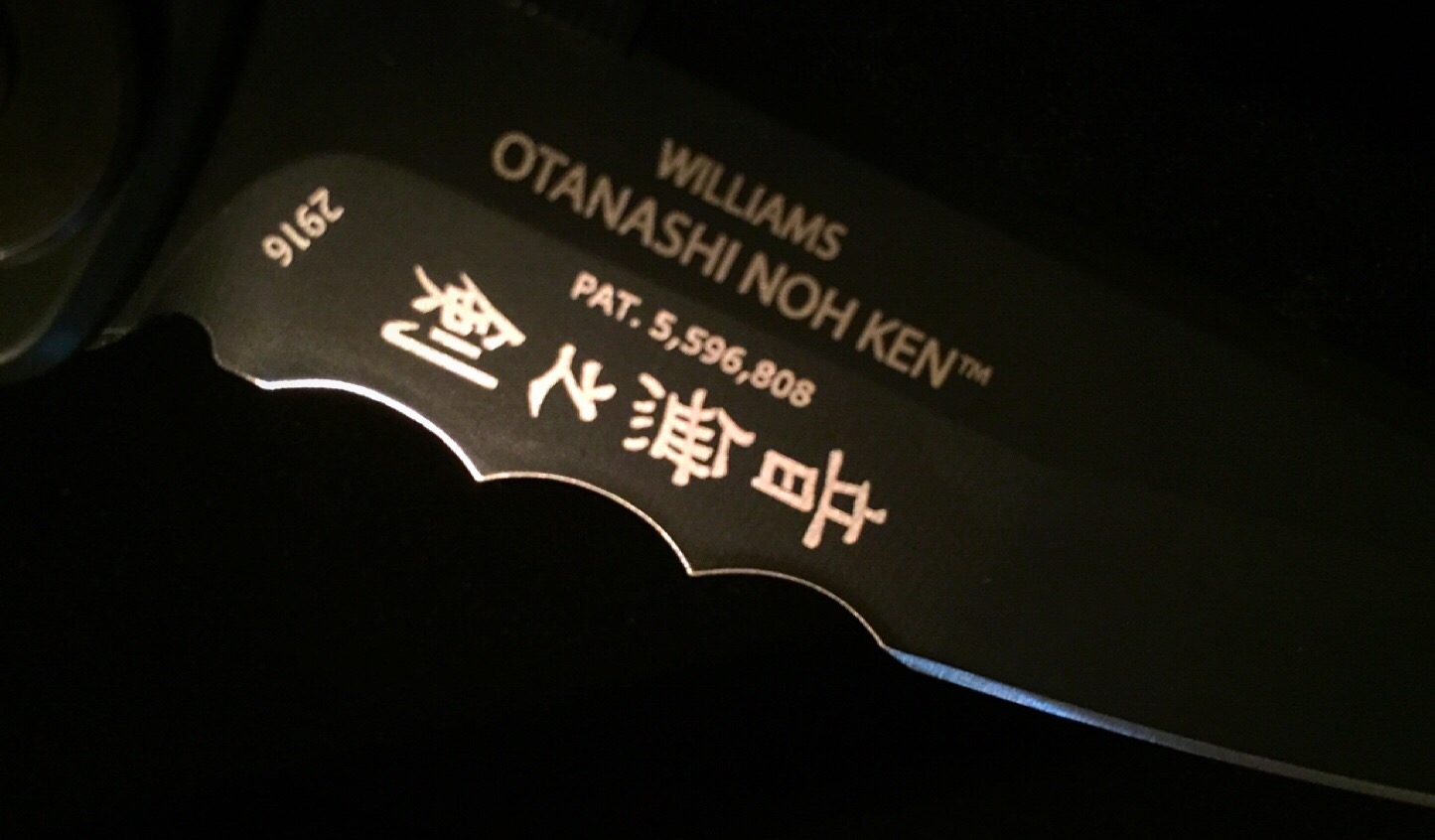 Designer James Williams made this a mouth full for us. With a 4.5 inch blade you would think it a pocket full as well but it’s not.
I first got a hand on this knife at ShotShow 2015 and followed up with CRKT a few times to see if I could get a sample to review and give away. Eventually, they passed on the idea and while I was out of mind for them this knife stuck in my head. Eventually, I bought one to get a better look.
The Otanashi Noh Ken (ONK) is one of the knives I was looking for in an attempt to conquer my nearly impossible list of wants that I shared in my review of the SOG Kiku folder.
1) Durable.
2) Quick to deploy.
3) Relatively light weight.
4) Not too bulky, something that won’t stick out badly in the pocket.
5) Large blade (4 or more inches)
The ONK is a contender.

Durability: the ONK is AUS8 steel and will certainly be tough as hell. The Kiku has the same steel and I cut trees down with it. I didn’t try that with the ONK due to this model having the CRKT Verf serrations (I’ll come back to this point).
Quick Deployment: the ONK is too large for a spring assist and has a round thumb stud on the spine of the blade that protrudes like a half moon to the back of each side.

I find this style of stud to be faster than a thumb hole or regular stud. I personally feel it’s about as good as it gets. This style of stud allows for maximum control of the blade in opening and closing at any speed. It’s also able to assist in starting the opening of the blade and using a wrist flick that with practice allows near instant deployment.
Relative light weight: the ONK is quite light for its size and I’m satisfied in this area.
Low Bulk: this is an area in which the ONK really excels. The knife is a frame lock with a flat scale on the other side. This automatically cuts bulk. But there is more; the exaggerated tanto styling of the blade is very slim cutting the needed width of the grip. Further, with the deep pocket clip and the shape that’s so flat and rectangular this large knife barely prints at all, and if it does, the shape is nondescript.
Large Blade: the ONK has a substantial 4.5 inch blade. The blade is indeed large in length but overall very sleek the design allows it to feel reasonable where other designs of the same length may feel unwieldy.

So to take a closer look; you also find a LAWKS system built into this knife.

It allows you to engage a safety tab that prevents movement of the liner lock and ensures the blade can’t close unexpectedly. A closer look at that safety shows the blocking bar to be very thin but being that the pressures on the lock are on a perpendicular vector I suppose not much was really needed to handle the job.

When opening the ONK the frame lock engages with such a satisfying thump that I doubt the LAWKS is even needed. (This being said, with intent, the knife can be opened silently if needed.)

Back to the blade. It’s 4.5 inches of AUS8 steel and designed for serious penetration. It’s sleek with a strong contoured spine. Mine came with the VERF serrations.

This feature would be great for slicing and slashing needs but they are cut deeply into one side of the blade and I fear they would not stand up to the abuse of chopping like the SOG Kiku. I could be wrong but feel this abuse is too far outside of the intended use to try with this blade.

Overall what I found was an exquisite knife that would make a hell of a good fighting knife for indiscreet urban carry. I am simply infatuated with this knife. So much so I don’t really want to carry it full time because I want it to remain pristine.

MSRP on the Otanashi Noh Ken is $150 and I don’t think you would regret full price, but it can be found on Amazon for half that price.