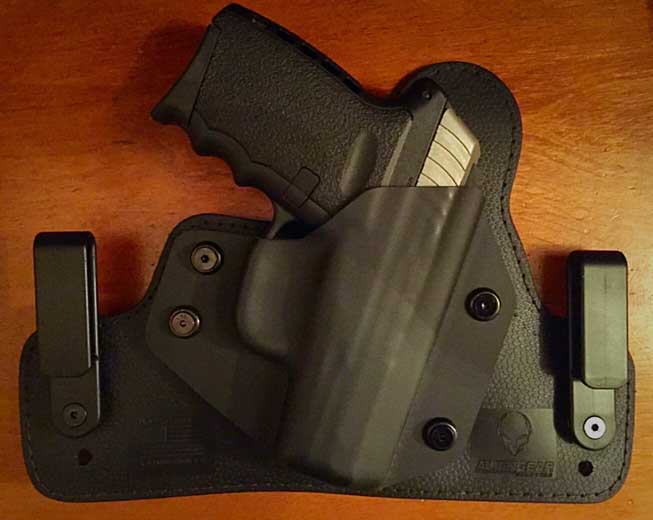 The newest in the line of Alien Gear CloakTuck evolution is the 3.0. The CloakTuck became a sensation with the original offering by providing high end adjustability at a low budget price. The CloakTuck is still available to those looking for the most options possible at a low end price.

This time I ordered the holster to fit a SCCY 9mm, just to show the kind of wide range of models the holsters can fit.

That same adjustability can be found in the new 3.0 version. The semi-auto plastic shells can be swapped out to change the holster fit for any weapon they fit on any holster they make.

So you may have bought a previous CloakTuck with an extra shell to switch between carrying a 1911 and a Walther PPQ; you can now purchase the 3.0 backing and be confident the old shells will work with the new system without a hitch. As before, the interchangeable shells are only available for semi-auto handguns, revolver shapes vary enough that they won’t work with such a system. (At least not economically.). As before, the holster has 3 anchors on each side to allow for adjustment of ride height and angle.

So what’s the difference with this version. There’s a few tweaks that were done that add significant value. First, it’s a little nicer finish to the holster overall. But mostly the improvements are hidden. This version has a thin spring steel core built in between the layers of the holster. This means the holster will retain its shape and rigidity longer and provide a better/longer service life. It’s a nice touch that you don’t see in the holster and it has no effect on the comfort of the holster in general. Even with my excess weight and folds I didn’t have any issue with the holster poking into me in any uncomfortable manner. The CloakTuck 3.0 still conforms nicely to the contours of the body.

Perhaps the biggest change the wearer will notice; the 3.0 has a nice finished backing. Previous versions were unfinished and while not uncomfortable they weren’t as nice as this. The 3.0 backing is nice, soft and smooth against the skin. Further, this new finished backing layer provides a covering for most of the hardware that was previously exposed. The hardware on previous holsters could rust due to constant skin contact and sweat. The 3.0 dramatically reduced that possibility.

So while the price has been climbing with each generation of CloakTuck so have the options. Regardless, you are still getting the adjustability you may pay $90 for with other companies for half the price and now you get some added comfort as well. The CloakTuck 3.0 is another win for Alien Gear Holsters.