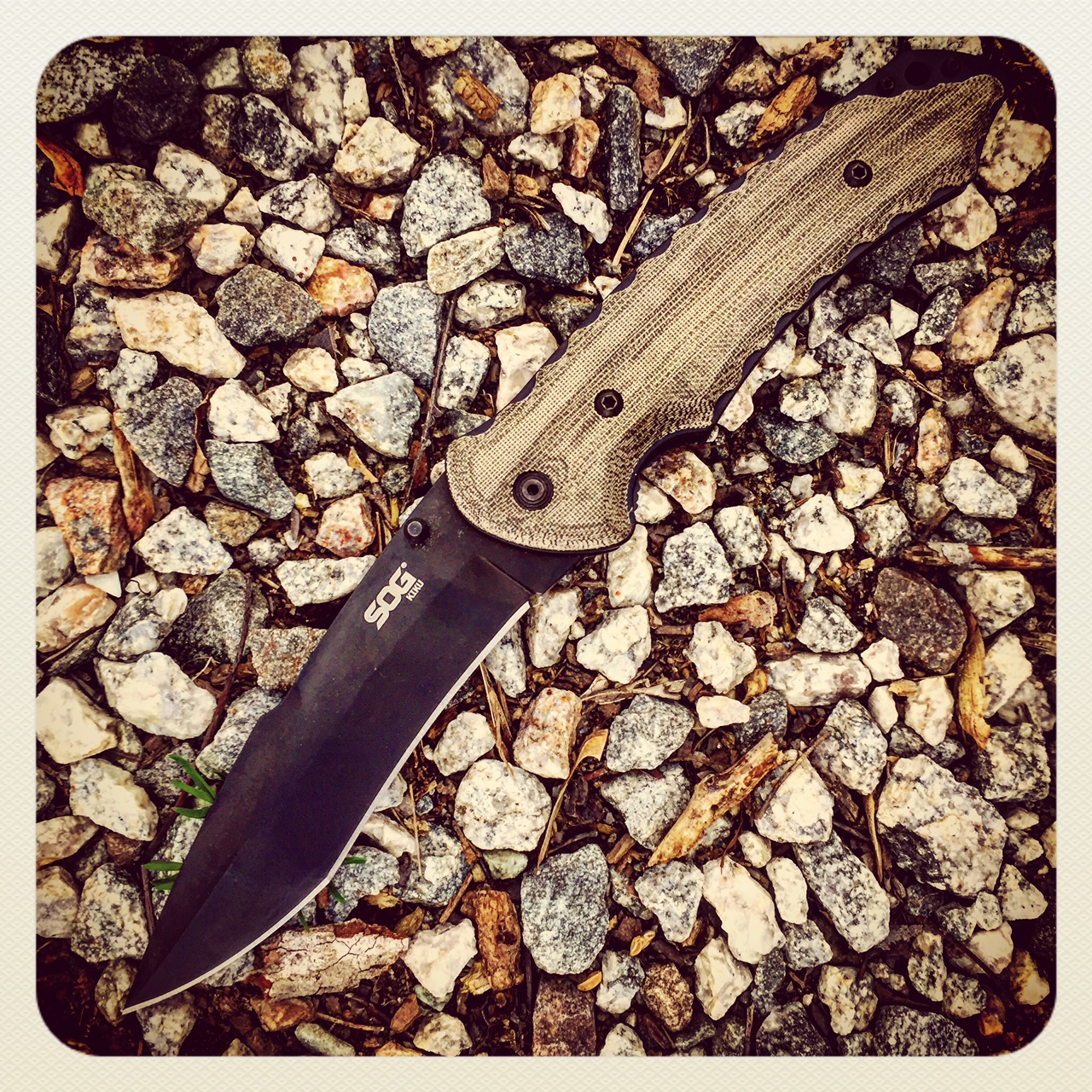 When it comes to knives I went to SHOTShow with a list of wants for a folding knife to recommend to my readers:
1) Durable.
2) Quick to deploy.
3) Relatively light weight.
4) Not too bulky, something that won’t stick out badly in the pocket.
5) Large blade (4 or more inches)

Individually each item on my list can be readily filled. Together, the list becomes quite difficult. When I looked at the line of knives offered by SOG, I found a few contenders. Of the SOG offerings I thought the Kiku 4.6 inch folder would be a good fit.

Let’s look at the wants individually as applied to the Kiku. We can start with item 2; quick to deploy. There are tons of knives on the market with spring assist flippers but none of them are sized as large as the Kiku. Once a blade becomes this large the spring assist usually wouldn’t have the strength to quickly deploy the blade (or perhaps deploy it at all). But the Kiku has no flipper and no spring. While I enjoy a spring flipper I look at the absence as a positive in this case. Don’ try something you can’t do well. So in the case of the Kiku a thumb stud and a quick flick of the wrist satisfy my need for quick deployment. The only negative in quickness lays with the pocket clip. The Kiku rides low in the pocket and if it were on my right side it would likely be a quick easy pull. However since I carry a backup gun in my right pocket the Kiku stays on my left and I find it a little difficult to pull quickly. For what it is, the only improvement I could ask for may be an Emerson wave.

Weight: for the size of the Kiku folder the weight is very light. I’ve not once thought the Kiku was dragging my pocket down in any way. The pocket clip (left or right as both are supplied) keeps the knife blade down and very deep in the pocket and out of the way. While the blade is 4.6 inches the design and shape help to cut weight both physically and visually. Many knives of this size start to look overwhelming in person but the Kiku is quite inviting.

This brings us to bulk: As stated the Kiku sits very low in the pocket. So long as you have pocket depth to handle the size the Kiku is quote discrete. I’ve worn it for months and nobody (even in the office) has noticed it or asked about it. The micarta scales are a little thicker than optimal for hiding a knife in slacks but they are proportioned well for this knife. If the scales were less substantial the knife wouldn’t feel right in the hand and would likely be less capable because of awkward grip.

Blade size: I had originally thought a five inch blade would be great. I even knew which knife I was interested in, the Fox Trakker! That is until I saw it in person. The five inch blade with its aggressive shape and a folding handle even larger to house it was just too much. The knife wasn’t realistic for normal EDC or pocket carry at all. The Kiku hit a sweet spot for me; 4.6 inches was only slightly shorter but the blade shape and grip styling make it infinitely more portable. This is a great EDC option with plenty of size for whatever task you need.

That brings us the the most impressive part about the Kiku, Durability: My number one concern about this knife was its origins in Taiwan. I know the knife is a SOG and that brings certain expectations, but to me Taiwan sent the opposite message. So I decided to try a task I have never thought to try with a folder. I started with newsprint. The knife shaved through it as if the thinner paper stock weren’t an added challenge at all. (This was an untouched factory edge that was performing so well.) Next I stepped into the woods and found 2 small oak trees and proceeded to chop them down with a folding knife. While not weighted or designed for such work the Kiku got through the task without damage or even a blemish to the finish. Afterward, I returned to the newsprint and to my surprise the shaving continued without difficulty! The edge retention is astounding. After such a workout the only thing I noticed was the action was a little looser than before and I just tightened the pivot a tiny amount to return it to the feel it had out the box.

In the end I would caution you to check local laws because certain areas don’t allow carrying a blade this size in a pocket. That being said, this Kiku makes a fantastic EDC for me. If I need to had to find points of criticism; I might saw a liner lock (though I like them) may not be the strongest type of lock for such a beefy folder. Also, some folks may find sharpening a challenge due to blade shape. Luckily the Kiku will rarely need it and besides the blade shape is part of its charm. I would say speed to deploy is the weakest area on my list for the Kiku with very strong marks in all other areas. The best part is you won’t break the bank buying it. The large version of the SOG Kiku folder retails on Amazon for $105. That’s a steal in today’s blade market!

One thought on “SOG Kiku Folder”