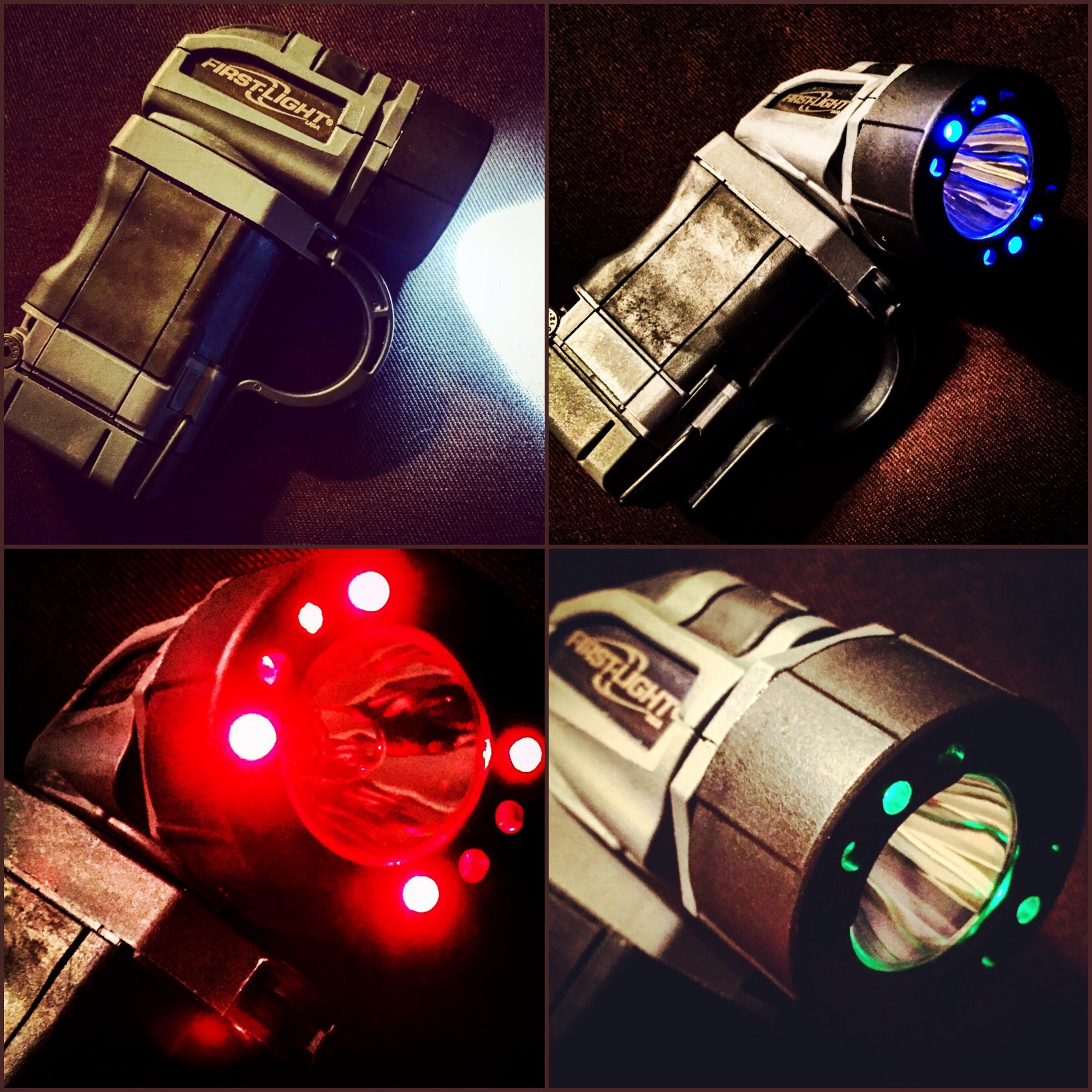 During my SHOTShow 2015 trip I saw a little bit of everything imaginable in the shooting world. Amongst the guns, knives, bags, boots and more were several manufactures of tactical lights. Of the lights displayed at the show, First-Light USA’s products stood out to me.  First-Light USA’s product design is a fresh and innovative update that reminds me of the old Vietnam era Fulton MX-991/U GI Flashlights.

Those old Fultons were designed with a 90 degree angle to the head that allowed some versatility and creative hands free operation. The First-Lights also utilize a 90 degree bend but in a modern and miniature way that proves to be extremely useful.

First lets talk about the basics. The TORQ at its core is a 155 lumen led tactical light. When held in the off hand, the TORQ couples easily and somewhat naturally with a handgun in your primary hand. In that position, the thumb lands right on top of the generously sized momentary activation switch leaving you ready for action. At the same time you have the added security of a pivoting finger loop adding positive retention for moments calling for the use of the offhand, such as reloading. This is the primary function of the light and it does it well.

If, at this point, you are scoffing at the lumen rating think again. The first weapon light I ever purchased was an Insight M5 weapon light the provided 80 lumens of brightness and came with a clear warning about the damage that may occur if shined into someone’s eyes and the migraine you’d have for days (it also came with a higher price tag). The TORQ is 155 lumens nearly twice as powerful and its drawing its power from 2 simple AA batteries.

But the TORQ offers so much more. Key to the versatility of the TORQ is that pivoting head. The lens is capable of 320 degrees of travel. From a tactical standpoint this means whether you utilize a nonstandard hold, MOLLE straps or belt clip the head can put the light where you want it. If you use the magnetic mount you could even slap the TORQ on the side of the car to illuminate a doorway and stand away to avoid being painted as a target. From a utility point of view this opens the light up to be at your side for nearly any task. Using the pivoting finger loop as a type of kickstand the TORQ can sit of whatever surface you want and point the head where it’s needed.

Immediately I think of a flat tire and how you could set the TORQ on the ground and illuminate the lugs. Another use may be setting the TORQ on a counter top and pointing it straight up on a low power for 10 hours of light in a power outage.  But my favorite use involves a strobe and I’ll talk about it later.

That brings us to settings. The TORQ has only three buttons so how much could you possibly do with it? Let’s see. The primary button is twice the size of its companions and has but a single function, momentary on, full power, 155 lumens of tactical illumination on demand. Simple, easy and effective.

Just forward and to the left is the white light control switch. A single click turns the light on using the power setting from the previous usage. Once the light is on, holding down this button will cycle through three intensity settings; simply release the button on the desired setting.

Holding this switch down when the light is off actives the unique strobe setting. The strobe on my TORQ cycles through a 150 lumen white light and high settings of red and green LEDs.The effect in a room setting would be quite disorienting. (The LEO version cycles through white, red and blue.)  The third switch provides colored LED illumination.

One click will turn on the color and intensity last used. Once the light is on holding the button will cycle through intensities of the current color light.

Holding the switch down while the light is off will allow the light to cycle through the various color choices, in this case red, green and blue.

Lastly, holding the two smaller buttons down results in a lockout function to prevent accidental activation and battery drain. That’s at least eight functions from three buttons. (Remember, while this may seem complex the main button does the emergency work of providing your most powerful light.)

Other physical features include a well sealed battery compartment housing a pair of AA batteries, a switchable and reversible side scale for belt clips or specialty mounts (MOLLE, Magnetic, etc.) and an altogether rugged feel.

The features of the light that really captured my imagination were less noticeable at first. Subtle usage choices that made the TORQ shine. In a tactical situation you can hold the TORQ on target while the gun beside it is trained on the ground.This keeps the possibility of accidental shootings lower. If deadly force is required you can simply pivot the gun up and fire.

You’re already in position and holding the gun downward feels unnatural so bringing it to bear just involves letting your muscles take you back to a normal hold. From the standpoint of the suspect, you would see the office in a firing stance with a bright light on you and you could probably make out an empty holster but i doubt you could tell the gun was not pointed at you.

Remember, that favorite use I mentioned, it’s another police usage. Imagine having to do a middle of the night traffic stop wearing a black uniform on a busy highway. I don’t envy the officer, they get hit all the time. Now I,aging having a LEO TORQ on your duty belt, pivoting the head to point behind you and turning on that multicolored strobe with 150 lumens of red, white and blue. I know I would feel more safe. The thought of something so simple possibly saving police officer’s lives really gets me. I think it’s a fantastic option and would like to start giving them to LEOs every chance I get. I think First-Light USA nailed it with the TORQ. Excellent work!

One thought on “First-Light USA TORQ”