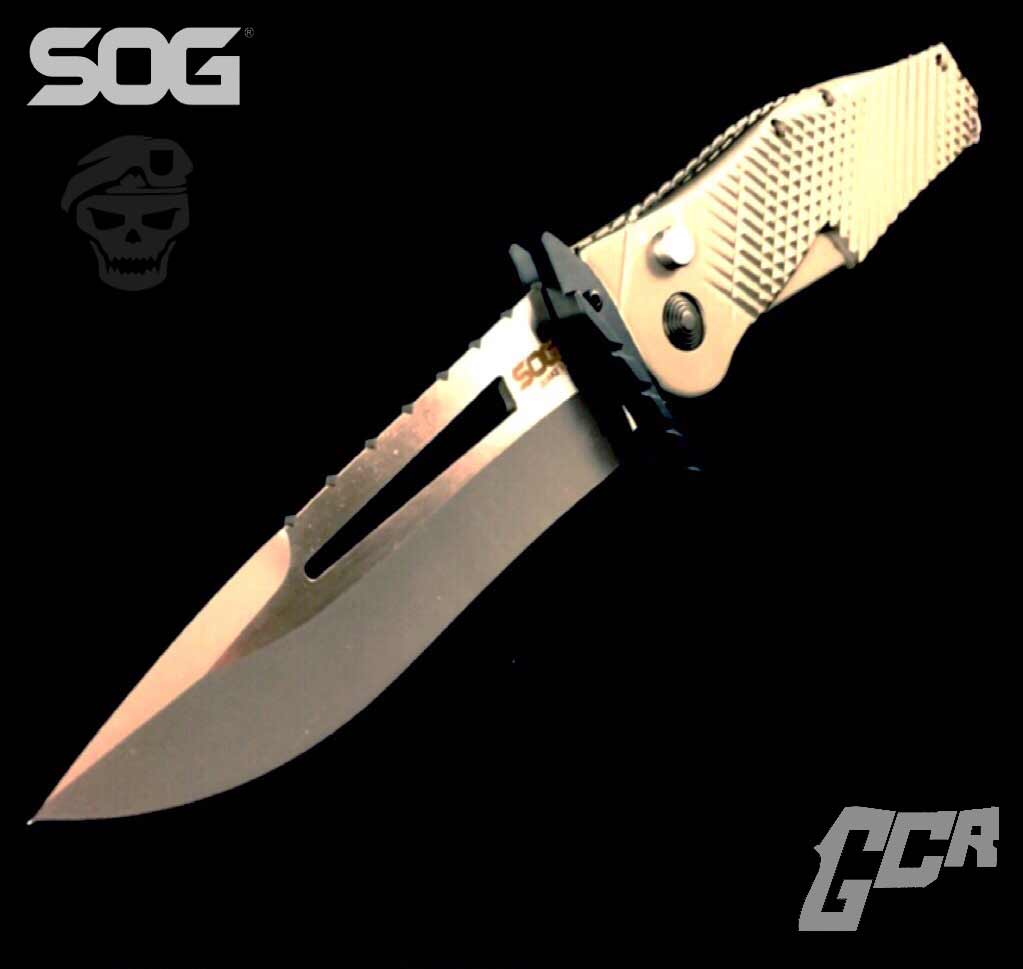 As stated many times now, I bring a product to your attention when it is new, innovative or just down right useful. I can make an argument for SOG in each category but the Quake XL folder attracted me innovation for sure.

The flashy draw of the Quake design is in the moving crossbar guard. In the closed position, it rests in line with the handle of the knife, completely unobtrusive. The Quake is spring assisted in it’s opening and in that process the guard pivots into place. When you first see that transformation it really gets your attention.

After some time with the Quake XL you start to see that while that pivoting action of the guard may have gotten you in the door the design is actually a lot smarter than you expected. The guard itself is also the lever that sets the spring assisted blade into motion. When I first started getting familiar with the Quake it seemed excessively difficult to open. (Most folks that have picked it up without instruction have had similar difficulties.) Regardless, the design had outsmarted the handlers. The first inclination is to thumb the lever at the front of the knife near it’s pivot point. Upon adding pressure near the front, you will find little to no movement and you will immediately fail to deploy the stainless VG10 blade. Instead, the trigger point is at the bottom of the guard near the middle of the handle.

In a world where flipper designs are so popular, we have all become so used to drawing a folder and moving the hand to the front to reach for the flipper along the spine. Drawing from the pocket and changing position takes time. SOG thought about that and I can see the reasoning that went into the Quakes activation. The knife is set up with a pocket clip and designed to be carried “point down” in the pocket. When you pull a folder from a pocket clip carry position you will notice your hand generally only reaches about half of the way down the handle. As luck (or well thought out design) would have it, your half handle grip lands you in just the right place to get the maximal leverage on the guard with minimal effort.

This all boils down to a quicker deployment of the blade when you need it. On the draw, my thumb lands right on the end of the guard and with just a little pressure the Quake XL leaps into action. When I say it “leaps” I chose that word specifically. The spring SOG is using in the Quake XL makes it lightening fast and almost feels as if it’s creating a little recoil. In the end, I am convinced that the Quake’s design is more logical and well conceived than most of what’s on the market.

As for construction, the steel choice in the Quake is impeccable. VG10 steel is a stainless choice that has been referred to as the “gold standard” in many cutlery circles. The blade is tough as hell and you won’t have to worry about rust. The XL offers 4.5 inches of VG10 that would be very intimidating if you’re on the wrong side of it.

The quake opens with a very satisfying snap and utilizes a push button lock release for closure. There is also a small safety lever at the front of the spine to help avoid accidental deployment.

The handle is aggressively textured for optimal grip and the knife seems to have jimping on everything that isn’t designed to be a cutting surface.

With all these features, I think SOG has a winner in the Quake line. I can’t wait to see what they come up with next.