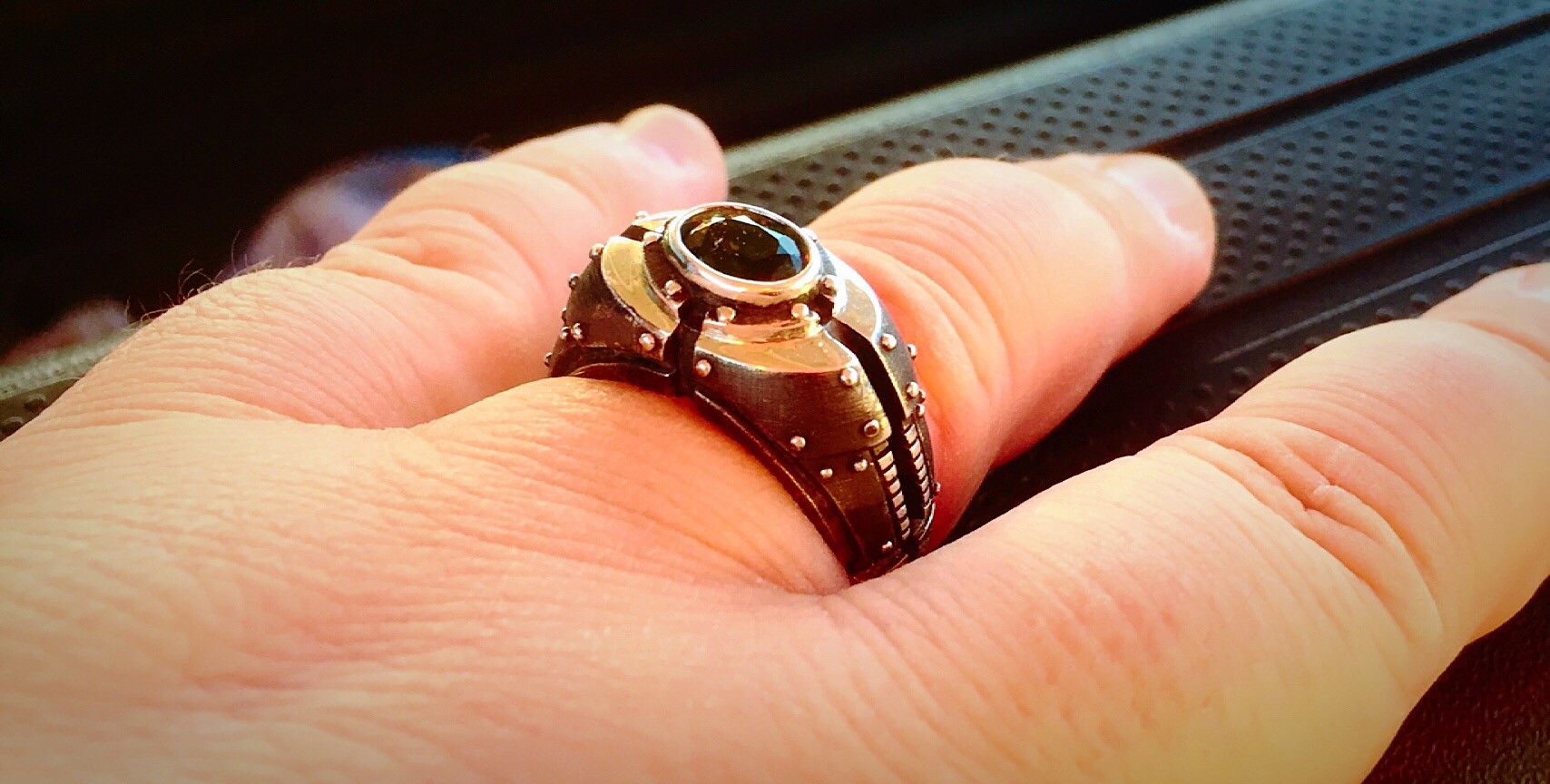 This may be off subject but when I see amazing service I want to share that business information so that others my benefit and so that those that do things the right way can thrive.  Thus my story appears in the blog section of this website.

Our sad luck with rings in the past…

When we got engaged and married, our rings were unique.  The diamond set I found for my wife was tension set in a bridge design like nothing I had seen before.  My ring was Tungsten with spikes around the band in such a way that they looked painful but were just short enough to be comfortable.  In our wedding, we passed the rings around the congregation to be blessed by everyone.  Those rings were irreplaceable to us.  So after a while of wearing a wedding ring I began to develop a divot in finger and my ring became too loose to wear.  I had to set about replacing it.  I ordered the same ring in a new size because Tungsten Carbide is too hard to cut and size, and it would have ruined the symmetry of the ring.  My new smaller band arrived and I wore it about 1 week before I found out that I am in the incredibly small percentage of people that are allergic to Tungsten.  Contact dermatitis made it impossible to wear.  So my unique ring was gone.  I was trading out cheap replacements while searching for something new.

The next blow was on my wife.  Her unique wedding set included two diamond wedding bands around the engagement ring.  The bands would turn on her finger and need to be straightened often.  So she decided to go to the store where we bought the ring and have them fuse the set together.  It’s certainly a common practice and a normal request.  Long story short, they lost her rings.  They had no way to prove them stolen so we couldn’t even get a police report.  Sadly, they were just gone.  After the jeweler failed to properly replace the rings, we filed with our insurance and had the rings remade properly by a stellar jeweler.  It took an additional 2 years and a court case to finally made us and the insurance company whole again.

Shortly after having the replacement rings made for my wife, I finally found a wedding ring I could be happy with while on vacation in the Bahamas.  Ironically, I had to order it from the designer in Canada.  I was stoked to have found something that was really me.  The band was called the “Armor Plate” and had tiny rivet accents spaced around the ring.  It was great looking and from a reputable jeweler.  After a couple months of wear, the rivets began to fall out.   It was maddening.  I contacted the maker and they were surprised I had any issue and immediately replaced the ring.  A few weeks later I was calling them again with the same issue. They replaced it again.  But by that time, I was done.  I just put the new one away for a special occasion and continued to wear the last failure.   To make it worse, the accents started to catch and pull out hair, and I don’t have extra to spare.

So for quite a long time, I’ve been searching for something that was unique enough that I would want to wear it and be comfortable with its quality.  Recently, I found what I was looking for on Etsy of all places.  The shop name is GatoJewel based in Kyiv Ukraine. The jeweler is a visionary named Yulia.  I fell in love with one of the ring designs and set about finding the perfect stone for it.  After some recommendations on a gem site from Yulia, I found exactly what I wanted and shipped it to Kyiv. Yulia made the ring and shipped it in a very reasonable time period.  The mail on the other hand can try anyone’s patience.  But the ring arrived unharmed.

What happened next is the reason I want to tell you about Yulia.  I opened the shipment and the ring was beautiful and exactly what I wanted, until I looked inside.  The back of the ring was hollow.  I never asked about that.  The ring would be fine for now but when summer in Virginia rolls around I wasn’t going to be able to wear it.  Personally, I hate hollow backed rings and while they are more accepted now, I don’t know why anyone would want a ring made that way.  I contacted Yulia and told her I would get quotes on filling the back of the ring but depending on the cost I may have to return the ring.  Yulia understood totally, she stated she had not talked about that part of the ring in the description and as such if I could not get it handled locally for a reasonable cost she would fill the ring for me at no cost. As it turned out, local jewelers wanted between $200 and $300 just to fill the back of the ring.  As you can imagine, I mailed it back to Kyiv for Yulia to fill it instead.

True to her word, Yulia went above and beyond anything I would have expected.  The ring is here, it’s on my finger and the back is solid and comfortable with no extra cost to me.  I would not expect the next person to get the extra material without paying but you will get exactly what you want.  Yulia and GatoJewel of Kyiv Ukraine are amazing and I hope she has finally broken the wedding ring curse for us.  Thank you Yulia.  I hope everyone that reads this orders jewelry from you.