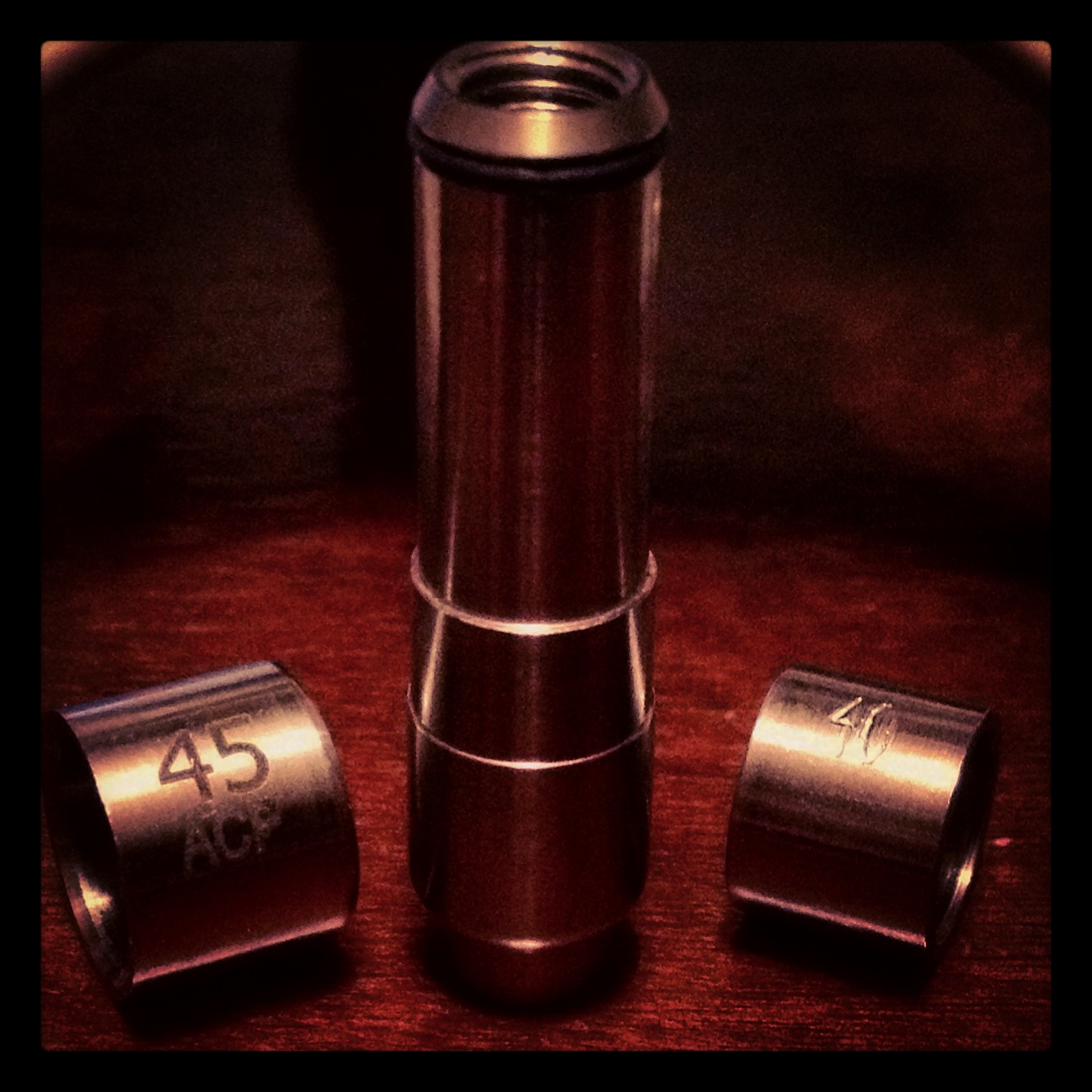 The SureStrike is the aptly named dry-fire practice round from Laser-Ammo.com. I received this system to test along with the LaserPet target system, but I feel the SureStrike is significant enough to warrant a separate review.
The standard SureStrike comes in 9mm with an optional adaptor kit for 40 caliber and 45ACP available. Depending on the purchased package a .223 SureStrike may also be included.
Why choose the SureStrike over other laser dry-fire practice cartridges?  The answers are multifold but can be boiled down to flexibility, reliability, durability and accuracy.
Flexibility: The SureStrike comes standard as 9mm and fits well and operates well as expected. But what happens when you want to practice with your 40 caliber?  In other systems you would have to buy another full laser cartridge or use a universal cartridge that is less accurate and reliable. In the case of the SureStrike the same firing pin activated cartridge can be moved from caliber to caliber by just simply adding an adapter ring.
Reliability: As stated the SureStrike is activated by a momentary on pressure switch placed as a primer would be on the back of the cartridge. This switch is actually activated by the strike of the firing pin while simultaneously cushioning the firing pin. Because the switch is physically being pushed to the on position by the firing pin, the laser fires every time. There is no doubt the laser will fire reliably and only when intended. This is the activation system you want to use in a laser cartridge. The alternative is a sound/vibration activated laser that should fire when the hammer/striker falls. The issues for these types are, the laser may not fire as it should, the sound activation can lead to dead batteries in storage, and you still need a snap cap. In the case of the SureStrike you have none of these issues.
Durability: The solidly built SureStrike is reported to provide a minimum of 5,000 laser strikes per cartridge. That’s a maximum of 2 cents per trigger pull with the initial investment and when the switch finally dies a replacement is available for only $39 (dropping the cost to a maximum of 3 cents per 4 trigger pulls).
Accuracy: The SureStrike design lends itself to amazing accuracy. No longer does dry-fire training have to be done with the hope of improving relation time alone. For the first time I’ve tested a laser that will help to train for bullseye competition. With the safety nut and extension pipe (found In adaptor kit and SureStrike sets) installed, the cartridge is not only centered in the battery but the safety nut forces the extension pipe to be center on the muzzle as well. Thus you get fantastic accuracy.  In fact the accuracy is so good that I’ve used the SureStrike as a tool to sight in new rear sights during installation. All I had to do was pick the farthest ceiling corner in the house and use a little trigger control to confirm I had my sights centered and adjust accordingly.
Finally, a note on safety; the SureStrike obviously saves you money on ammunition by providing an alternative type of training with your real firearm.  It also allows you to practice skills that you cannot learn in an otherwise safe and secure manner.  Of what am I speaking?  Trick shots.  If you want to learn to fire a weapon from the hip, or aim with a mirror, shoot a gun upside down or any other crazy way of handling your pistol, I would recommend you learn using the SureStrike in lieu of live ammunition.  At least in the beginning, you will have no idea where that bullet may end up.  Instead, use a SureStrike to build your skill.  Only moving to live ammo once you are at 100% and know you can attempt the shot safely.

All in all, the SureStrike is the best system I’ve found for dry-fire laser practice to date.  Buy yours at www.laser-ammo.com

Thoughts about the system from one of the winners.